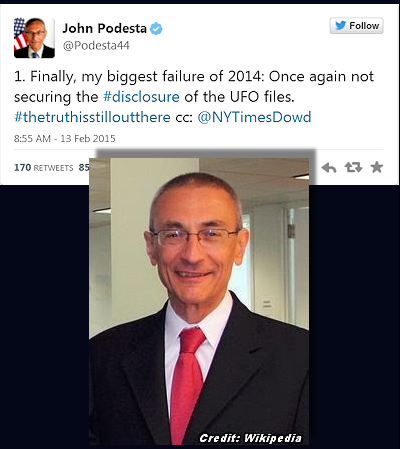 Biggest Failure’ Was Not Securing The Disclosure of UFO Files

Outgoing Obama counselor John Podesta remains a devoted fan of things extraterrestrial. When Podesta, who was President Bill Clinton’s chief of staff, returned to White House duty in late 2013, we wrote that his arrival meant “the Obama presidential library will be inundated — just as the Clinton library in Little Rock has been — with Freedom of Information Act requests, such as this one: for ‘e-mails to and from John Podesta, containing the words either, X-Files or Area 51.’”

Podesta was a major fan of the “X-Files” television show. Our colleague Karen Tumulty asked him in 2007 about the FOIA jam at the library, and Podesta, through a spokesman, replied: “The truth is out there.” That’s the show’s tag line.

And, just to make sure the FOIA requesters don’t forget, Podesta tweeted Thursday: