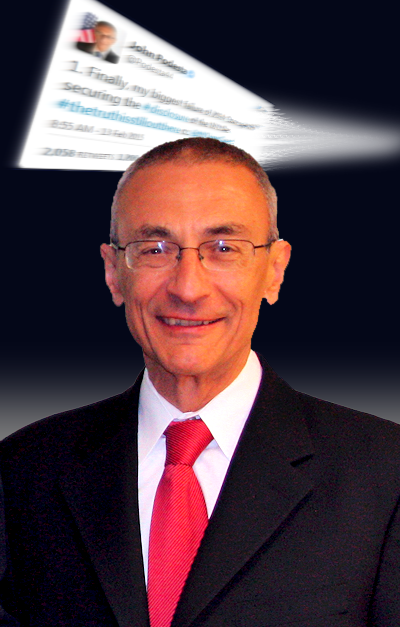 By now, everybody’s read John Podesta’s little Friday afternoon firecracker, where he took less than 140 characters to announce his biggest regret in leaving the Obama White house was a failure to bring transparency to America’s UFO files. Brevity being the soul of wit and all that, one naturally assumes there was a little sarcasm or self-deprecation at play here, despite the former Clinton White House chief of staff’s multiple (and correct) assertions that UFOs are actually pretty serious stuff. After all, if you look at his statements on UFOs over the years, they really don’t amount to much more than an anthology of sound bites. Consequently, the media responded with equal proportion, duly noting Podesta’s Tweet with minimal comment, the way one might take stock of any harmless celebrity idiosyncrasy, like Jay Leno’s fleet cars or XYZ’s Coconut Monkeys of Polynesia collection.

One might even be tempted to give Podesta props for putting it out there again, considering how he wasn’t obliged to say anything at all. But after reading Sunday’s New York Times profile, Friday’s Twitter breadcrumbs come off as quite puzzling. Associates describe Podesta as a competitive, workaholic straight-shooter who enjoys a good scrap. “He’s not afraid to use power, and ruthlessly if necessary,” said veteran Dem operative Paul Begalia. “I think he’s as good a political guy as I’ve ever seen.”

Great. So that begs the question: What, exactly, specifically, if anything, did Podesta do over the last two years to warrant that surprise Tweet last weekend? Can’t blame the media for being so spare on this one — he gave us nothing to work with, no hint that he’d used that famous competitive streak to butt heads with whatever behind-the-scenes UFO classification obstacles he might have encountered. Assuming he made an effort. So what gives?

Now, juxtapose Podesta’s little nugget against what passed for news (again) last week at the convention of the American Association for the Advancement of Science in San Jose, Calif. The SETI people were at it again, weighing the risks of sending formal collaborative radio messages to their theoretical kindred spirits in radio astronomy in distant worlds. Godawmighty, how many times must we endure this trifling academic hand-wringing over the perils of provoking some ET Pizarro or Cortez from Planet Zyrtek? Our radio signals have been alerting The Other to our presence for almost a century now, yet suddenly we’re seeing luminaries like billionaire Elon Musk and planet detective Geoff Marcy circulating petitions calling for a ban on sending messages into space? Really? Check this out — astrophysicist David Brin actually said this to the Associated Press: “I can’t bring myself to wager my grandchildren’s destiny on unreliable assumptions” about contacting nice space aliens.

Oh for cryin’ out loud. Wouldn’t you think, given this level of obstreperous angst, and with the potential for ET enemies (5,000 extrasolar planets either logged or awaiting confirmation) increasing by the month, it would be totally irresponsible for these guardians of the realm not to exhaust each and every line of scientific inquiry on the gathering threat? Well, um, no. Here’s the key sentence in the AP report from San Jose: “… what scientists are talking about is a coordinated and sustained million-dollar-a-year effort with approval from some kind of science or international body and a message that people agree on” [emphasis: De Void]. Naah, UFOs don’t rate that kind of funding, man. At least not unless somebody of, say, John Podesta’s heft steps up, quits flirting around the elephant in the room, and makes the case. But that’s not likely, given his apparent commitment to Hillary’s 2016 presidential campaign.

Until that day comes, looks like we’re doomed to endure endless SETI seminars on how many angels can dance on the head of a pin.

At least we got a Tweet. And we’re grateful for that.