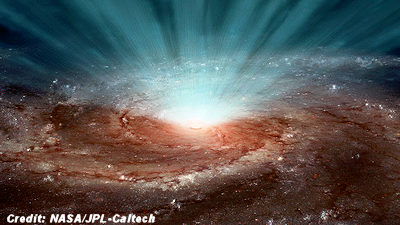 A ravenous, giant black hole has belched up a bubble of cosmic wind so powerful that it could change the fate of an entire galaxy, according to new observations.

Researchers using two X-ray telescopes have identified a cosmic wind blowing outward from the supermassive black hole at the center of galaxy PDS 456. Astronomers have seen these winds before, but the authors of the new research say this is the first observation of a wind moving away from the center in every direction, creating a spherical shape.

The wind could have big implications for the future of the galaxy: It will cut down on the black hole’s food supply, and slow star formation in the rest of the galaxy, the researchers said. And it’s possible that strong cosmic winds are a common part of galaxy evolution — they could be responsible for turning galaxies from bright, active youngsters to quiet middle-agers. . . .