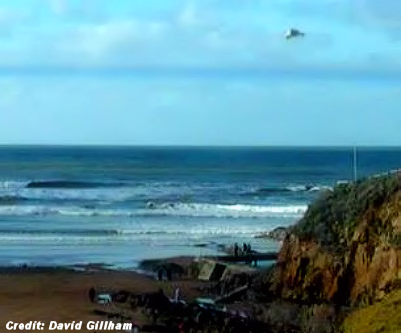 A ‘UFO’ has been captured in a photograph in the skies above Cornwall – which has emerged on the day RAF jets scrambled to intercept two long-range Russian “Bear” planes over the region.

One Cornish beachgoer spotted something in the sky and, despite close scrutiny, it was not obvious what that object was – causing much speculation.

Members of the Cornwall UFO Research Group have been debating a possible extraterrestrial sighting after this image was posted on their Facebook page and began circulating on social media.

The image gained more interest today as RAF fighter jets escorted a Russian bomber plane away from the skies off the Cornish coast.

The picture appears to show a “triangular shape” hovering above the walkers gathered on Summerleaze Beach at Bude.

And David Gillham who posted it to the group, said it was the second sighting of the strange object in as many weeks. . . .

The Cornwall UFO Triangle
Most Sightings in UK