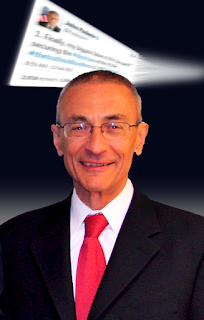 It was the tweet heard round the worlds. On John Podesta’s last day at the White House on February 13th, the longtime Presidential counselor, who is likely to chair a 2016 Hillary Clinton campaign, dashed off a confession that lit the blogosphere with thousands of retweets and comments: “Finally, my biggest failure of 2014: Once again not securing the #disclosure of the UFO files.”

Along with the media, which couldn’t resist a spoof by late-night comedian Jimmy Fallon, conspiracy theorists are having a field day. Taking Podesta’s barb as confirmation of fantastic coverups by operatives with knowledge of extraterrestrials and twisted political agendas, they imagine Podesta himself holds devastating secrets. Some are claiming with bravado that their own activism is what prompted his recent lighthearted remark.

The facts hardly bear that out.

Actually, as surprising as the tweet was, Podesta’s position on the controversial issue was not exactly news. A staunch proponent of open government, he has previously called for the release of any government files on unidentified flying objects, or more broadly, unidentified aerial phenomena (UAP), that merit such action under existing law. As Chief of Staff for President Bill Clinton, Podesta pressed for Executive Order 12958 which declassified broad categories of information formerly withheld on the grounds of national security.

In 2002, Podesta began publicly supporting what became a landmark Freedom of Information Act (FOIA) lawsuit filed by the Coalition for Freedom of Information, an independent advocacy group. NASA had been stonewalling and refusing to release its records concerning a significant 1965 UFO incident in Kecksburg, PA. . . .

“…A Failure To Bring Transparency To America’s UFO Files”