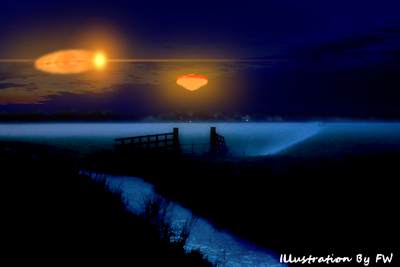 An Oklahoma witness at Ada reported watching two objects hovering under 300 feet just south of his home, according to testimony in Case 63403 from the Mutual UFO Network (MUFON) witness reporting database.

The reporting witness was in his living room at 9:32 p.m. on Friday, February 13, 2015, when he noticed that his son had driven onto his property, but his vehicle was stopped near the gate approximately 300 feet east of the house.

“He sat there about 10 minutes or so,” the witness stated. “I thought it was a bit unusual, but I have seen him drive past the house down into the pasture checking out deer or coyotes, so I didn’t think much of it.”

A short while later the son came into the house.

“Both were a dull orange color. The diamond-shaped object seemed to ‘sparkle’ while the donut remained a dull orange the entire time we observed it.” . . .