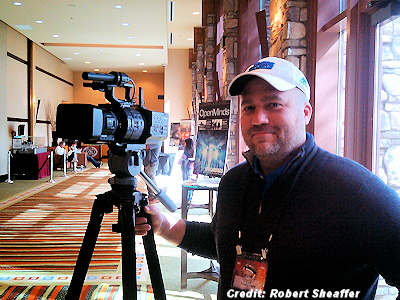 Editor’s note: Noted skeptic, Robert Sheaffer made the trip to The UFO Congress last week and posted his experience to his blog (while there), which in large part were the talks he attended by various UFO personalities–this included Mexican UFO journalist, Jaime Maussan. Towards the end of his talk, Maussan introduced Adam Dew, who (as our regular readers are aware) is one of the parties involved in the upcoming show, hosted by Maussan to reveal the so-called Roswell Alien Slides. In the aftermath, Sheaffer was able to get some face-time with Dew. With Robert’s permission, we present that dialogue here:

Afterward, a number of people sought out Maussan, but nobody was talking to Dew. I introduced myself to him, and began asking him questions.

Sheaffer: How did you first obtain the slides?

Dew: The slides were found by the sister of my friend as she was cleaning out a house to be demolished in Sedona, AZ. They said, Adam is a video expert, let’s give the slides to him.

Sheaffer: Who is the owner of the slides?

Dew: My company is the “owner” of the slides, it controls the slides.

Sheaffer: How did Schmitt and Carey get involved?

Dew: I’ve spent two years researching and investigating the slides. I wanted to speak to people who have seen the bodies.

Dew: No, but they are the professionals. They spoke with credible people who did.

[I explained that Karl Pflock (certainly no UFO debunker) showed that all of the supposed “witnesses” who claimed to have seen alien bodies in Roswell have been discredited (“only four persons claiming firsthand knowledge of alien bodies have been interviewed by Roswell authors and identified publicly… there can be no reasonable doubt that none of the purported firsthand witnesses to alien bodies and a lonesome survivor is credible. Not one.” Pflock, Roswell – Inconvenient Facts and the Will to Believe, p. 118, 120.). I should also have mentioned Schmitt’s well-known loose relationship with the truth. (Neither Schmitt or Carey was at the Congress this year. I spoke with Schmitt when he was there last year, but nothing was said about the Roswell Slides.)]

Sheaffer: How did Maussan get involved?

Dew: Schmitt and Carey brought him in. Maussan offered a nice package.

[I explained how the fact of Maussan’s involvement made many knowledgeable people in the UFO field immediately suspect a hoax, given his reputation for promoting many UFO hoaxes in the past. I had the impression that Dew, clearly a newcomer to UFOlogy, was not familiar with Maussan’s oeuvre, or his reputation as a purveyor of rubbish. I suspect that Dew did not realize how much trouble bringing in Maussan would cause. He felt that some people were being very unfair and making unfair accusations about the slides, that they have not even seen. I referred to Maussan’s just-concluded talk, invisible beings and such, as illustrating my point. ]

Dew: “How can you prove that?”

[I explained that the burden of proof is on Maussan to show that his wild claims are valid, not on me to disprove them. Dew agreed.]

Dew: I’m interested to bring this thing to the public, to people who don’t know Maussan. I just did an interview about this in Chicago, on WGN.

A few minutes later, Dew came up to me and asked if he could interview me about the slides! I agreed, and signed his standard release form.

We talked about the controversy over the slides.

I explained how Maussan’s involvement made people extremely suspicious of the slides.

He said to me, You realize, I hope, that nobody gets rich making documentary films? Look at my crew, he said, pointing to himself and his camera. I replied, yes, I have heard that before (I was thinking of similar comments made by Paul Kimball, when he took on the late Roger Leir.). But in a few cases, I explained, large sums of money have been made, the most obvious example being Ray Santilli’s Alien Autopsy hoax twenty years ago. Dew was indeed familiar with this.

When the Alien Autopsy video was shown on TV, it got tremendously high ratings and made a lot of money, even though most serious persons realized it was probably a hoax. But that couldn’t be proven yet. By the time that the hoax was exposed, Santilli had already made a great deal of money on it, and I said that many people think that you, Mr. Dew, will travel that same path. So I ended up comparing him to Ray Santilli, by which he seemed slightly taken aback, but I think he saw the reasoning behind that and took it humorously and without offense.

I closed repeating the observation that “extraordinary claims require extraordinary proof,” and that two photos of unknown origin, no matter what they seem to show, cannot possibly suffice to prove the reality of crashed saucer aliens. He seemed to agree with my point.

So if someday you see my face in one of Dew’s videos about the Roswell Slides, don’t be surprised!

I asked Dew did he live in Chicago? He said yes, that’s where I’m “based.” I don’t want to talk about where I live. He also told me, No matter what you hear on the internet, I really am a graduate of Northwestern University, in Journalism. I told him that I am a Northwestern graduate, too.

Based on our conversation, here is what I understand the history (and planned future) of the “Roswell Slides” to be:

• Through a social connection, Dew obtains a collection of historical slides. He discovers that two of them seem to show what looks like a supposed alien body.

• Seeking out ‘Roswell experts,’ Dew (not surprisingly) happens upon Schmitt and Carey. He contacts them and shows them the slides. They share it with members of their “Roswell dream team.”

• After convincing themselves that the slides seem authentic, Schmitt and Carey contact Maussan to arrange a profitable “unveiling” of the slides.

• Maussan presents an attractive offer which Dew accepts. The slides will be revealed to the world in Mexico City on Cinco de Mayo, 2015, which is also the twentieth anniversary of the premiere screening of Ray Santilli’s Alien Autopsy video before an invited audience at the Museum of London.

• Afterward, assuming that the slides are authenticated, Maussan told an Italian journalist that John Rao, the wealthy businessman who operates Open Minds (the promoters of the International UFO Congress), has expressed an interest in buying them. Assuming that takes place, next year’s UFO Congress (already scheduled to take place in the same location) will presumably have the Roswell Slides displayed in a glass case.