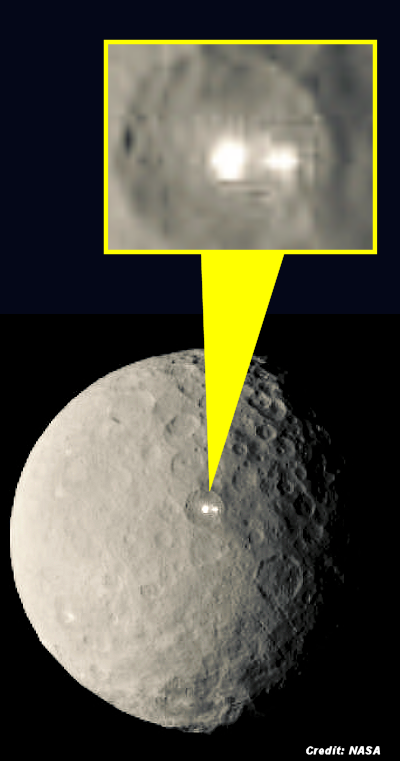 February 25, 2015—Dwarf planet Ceres continues to puzzle scientists as NASA’s Dawn spacecraft gets closer to being captured into orbit around the object. The latest images from Dawn, taken nearly 29,000 miles (46,000 kilometers) from Ceres, reveal that a bright spot that stands out in previous images lies close to yet another bright area.

“Ceres’ bright spot can now be seen to have a companion of lesser brightness, but apparently in the same basin. This may be pointing to a volcano-like origin of the spots, but we will have to wait for better resolution before we can make such geologic interpretations,” said Chris Russell, principal investigator for the Dawn mission, based at the University of California, Los Angeles.

Images are available at the Ceres Science Gallery.

Using its ion propulsion system, Dawn will enter orbit around Ceres on March 6. As scientists receive better and better views of the dwarf planet over the next 16 months, they hope to gain a deeper understanding of its origin and evolution by studying its surface. The intriguing bright spots and other interesting features of this captivating world will come into sharper focus.

“The brightest spot continues to be too small to resolve with our camera, but despite its size it is brighter than anything else on Ceres. This is truly unexpected and still a mystery to us,” said Andreas Nathues, lead investigator for the framing camera team at the Max Planck Institute for Solar System Research, Gottingen, Germany.

Dawn visited the giant asteroid Vesta from 2011 to 2012, delivering more than 30,000 images of the body along with many other measurements, and providing insights about its composition and geological history. Vesta has an average diameter of 326 miles (525 kilometers), while Ceres has an average diameter of 590 miles (950 kilometers). Vesta and Ceres are the two most massive bodies in the asteroid belt, located between Mars and Jupiter.

Dawn’s mission is managed by JPL for NASA’s Science Mission Directorate in Washington. Dawn is a project of the directorate’s Discovery Program, managed by NASA’s Marshall Space Flight Center in Huntsville, Alabama. UCLA is responsible for overall Dawn mission science. Orbital ATK, Inc., in Dulles, Virginia, designed and built the spacecraft. The German Aerospace Center, the Max Planck Institute for Solar System Research, the Italian Space Agency and the Italian National Astrophysical Institute are international partners on the mission team. For a complete list of acknowledgements, visit: http://dawn.jpl.nasa.gov/mission . . ..

Is There Life On Ceres? Water Detected on Dwarf Planet