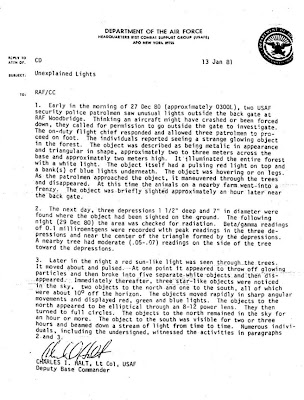 Given the self-inflicted wounds created by the Department of Veterans Affairs, bureauland must feel like a bunker these days, in Washington as well as its regional offices across the U.S. A waiting-list death scandal, more than 900 personnel firings, the resignation of director Eric Shinseki, whistleblower retaliation — on and on it goes, drama without end.

Well, depending on if/how the MSM responds, VA officials might want to tug those chin straps a little tighter. That’s because, last Sunday, Mississippi attorney Pat Frascogna issued a press release titled “U.S. Government’s De Facto Acknowledgement of the Existence of UFOs.” (More details at Earthfiles.com) At its core was the resolution of a complicated — yeah, they’re all complicated — service-connected disability dispute involving Air Force veteran and Arizona resident John Burroughs. Burroughs was a key witness to the so-called Bentwaters/Rendlesham Forest UFO incident of 1980. In 2013, at the Citizen Hearing on Disclosure at the National Press Club, Burroughs and retired USAF colleague Jim Penniston recounted their inability to acquire their military medical records from more than 30 years ago.

During efforts to link his heart damage to UFO radiation exposure while responding to a reported security breach on the perimeter of the British-based American air base, Burroughs encountered a roadblock on the paper trail. Although he joined the USAF in 1979, the VA said the earliest service records it could locate dated only as far back as 1982. Burroughs went through two Arizona Senators’ offices — Jon Kyle and John McCain — before the political wheels were able to recover his initial discharge papers, which placed him exactly where he said he was in December 1980. But his medical records are still out there, somewhere.

Nevertheless, bottom line, last month, the VA informed Burroughs it was awarding him a full disability for his heart condition, which required life-saving surgery in 2013. The agency based its decision on 21 bulleted items. Among them was “Service Treatment Records, from February 1979 to April 1988,” the earliest of which Burroughs — again — has never been able to examine for himself. But this listed factor is the real eye-popper: “Duplicate documents regarding the Rendlesham Forest Incident, received May 2, 2014.”

“Now, after decades of persistence,” Frascogna announced in his press release, “the U.S. Government has finally acknowledged that John Burroughs suffered adverse health effects in the Rendlesham Forest and, therefore, has recognized the link between his health problems and the UFO he encountered.”

De Void’s attempt to get a VA response has yet to bear fruit, as they say. But the “duplicate documents” referenced in the Veterans Affairs verdict is a formerly classified British Defence Intelligence Staff assessment of UFOs from 1997-2000. The Brits referred to those cases by the less incendiary acronym UAP (Unidentified Aerial Phenomena). Known as Project Condign and released to the media in 2006, the study argued UFOs/UAP weren’t intelligently controlled vehicles but were, instead, the product of mysterious meteorological forces like plasmas that science can’t explain.

In attempting to account for the unquestionably bizarre and un-weather-like eyewitness reports across the board, Condign produced a section called “Potential Mental Effects on Humans” suggesting how UAP electrical fields might scramble the brain’s temporal lobe, manifesting into hallucinations or episodes of “missing time.” For Burroughs, the key passage is this:

“The well-reported Rendlesham Forest/Bentwaters event is an example where it might be postulated that several observers were probably exposed to UAP radiation for longer than normal UAP sighting periods. There may be other cases which remain unreported. It is clear that the recipients of these effects are not aware that their behaviour/perception of what they are observing is being modified.”

Weather capable of emitting enough acute radiation to cause heart damage. Go figure. Anyhow, how big a deal is this? A statement from the VA’s public affairs desk in Washington says privacy laws prohibit the agency from discussing individual cases. It adds, “(The) VA granting service connection should in no way infer anything beyond the establishment/existence of these requirements/factors.” And by “requirements/factors,” it means “medical evidence providing a connection between the current disability and the service.”

So here we are.

Burroughs is still trying to get his hands on those classified medical records. If the media follows precedent on its coverage of The Great Taboo, this shouldn’t become an issue for the VA. And that ought to be a relief, because those guys have more than enough fires to put out already.