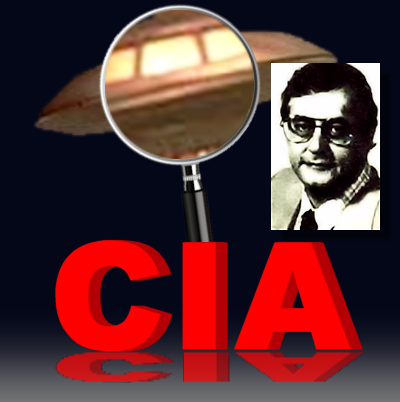 First, this article has absolutely nothing to do with the bogus claims currently being made by the promoters of the so-called Roswell Slides, which allegedly show the body of a dead alien. (I predict that this latest, regrettable chapter in ufological history will implode in the near future.)

No, my title refers to a far more credible revelation. Although Victor Marchetti, the former Special Assistant to CIA Director Richard Helms, first published intriguing information relating to high-level discussion of recovered UFOs and dead aliens in 1979, in an article published in Second Look magazine, most people are completely unaware of it.

Indeed, an online search for the piece, titled “How the CIA Views the UFO Phenomenon”, yields very few results. While the Internet provides access to vast numbers of UFO-related documents, books, articles and blogs, one of the most important pieces ever written on the topic, authored by a knowledgeable government insider, has been almost completely overlooked.

Interestingly, when I attempted to post Marchetti’s informed disclosures at a popular blog operated by journalist Billy Cox, my comments and link to the article disappeared into the cybervoid. Repeated attempts met the same fate and, when I subsequently asked Cox to post them for me, he encountered the same problem.

Cox later told me, “I managed to get your post on my blog just now, but it took some doing. When I tried to do it normally, by putting your name and email address in the cue fields, it simply wouldn’t post; I kept getting a message saying it had already been posted, which obviously it had not. And of course when I try to reply to your messages lately, it bounces back as undeliverable. I wound up having to publish it under my name, then going in behind the post and replacing my name/address with yours. Very strange, Robert.”

I told Cox one might argue that efforts had been undertaken, by an unknown party, to block Marchetti’s revelations from being made more accessible online. Lest this charge seem too paranoid, I added that I had often had to endure such anomalies when attempting to communicate with my ex-military sources regarding their involvement in UFO incidents at nuclear weapons sites.

Furthermore, my attempts over the years to post those individuals’ disclosures at various blogs had frequently encountered the same sort of disconnects. Nevertheless, some of those dramatic revelations—involving UFOs shutting down American nuclear missiles—were livestreamed by CNN during my 2010 press conference in Washington D.C.:

In any case, Marchetti’s lengthy article contains important information about the CIA’s secret involvement, as well as its self-proclaimed non-involvement, with the UFO phenomenon. He writes, “I do know that the CIA and U.S. Government have been concerned over the UFO phenomenon for many years and that their attempts, both past and recent, to discount the significance of the phenomenon and to explain away the apparent lack of official interest in it have all the earmarkings of a classic intelligence cover-up.”

To give you a sense of the author’s importance, the agency once took Marchetti all the way to the U.S. Supreme Court, to attempt to stop the publication of his tome, The CIA and the Cult of Intelligence, which subsequently became a best-seller in 1974. The disenchanted agency man had resigned from the CIA in 1969; his book was an unprecedented, historic exposé of his former employer’s numerous illegal activities—including spying on Americans, something forbidden by its charter—many of which were later investigated by Congress.

In short, Marchetti was especially dangerous to CIA simply because he knew so much about its operations, legal or not, and was willing to divulge them to the world as a hoped-for partial antidote.

While this same informed-observer status and careful, thoughtful analysis underpins Marchetti’s revelations about the agency’s relationship to UFOs, it must be remembered that CIA’s approach to all subjects is the use of compartmentalization, whereby any given individual’s knowledge is usually limited to one small part of a project or operation, to keep an overall understanding of the situation restricted to a very few high-level managers. The same was/is true with UFOs and, therefore, Marchetti can only report on what he personally knew, given that he was not involved with the agency’s apparent UFO projects/operations and had no need-to-know about them.

Nevertheless, his published comments are noteworthy. He writes:

During my years in the CIA, UFOs were not a subject of common discussion. But neither were they treated in a disdainful or derisive manner, especially not by the agency’s scientists. Instead, the topic was rarely discussed at internal meetings. It seemed to fall into the category of ‘very sensitive activities’…People simply did not talk about the UFO phenomenon.

There were, however, rumors at high levels of the CIA—rumors of…little gray men whose ships had crashed, or had been shot down, being kept ‘on ice’ by the Air Force at FTD (the Foreign Technology Division) at Wright-Patterson Air Force Base in Dayton, Ohio.1

Please note that Marchetti used the word “rumors”. Again, this is the result of his own non-involvement in whatever “very sensitive activities” CIA had going on relating to the UFO phenomenon. Consequently, whatever information Marchetti was privy to resulted from informal and undoubtedly unauthorized chitchat he had encountered in the corridors of CIA headquarters.

But if stories of crashed UFOs and the bodies of the crews being kept in cold storage were being discussed at “high levels” within the agency, one can infer that those rumors were taken seriously. One might also speculate that information about all of this had been secured by CIA agents, probably by spying on the U.S. Air Force.

One important aspect of Marchetti’s revelation is the timing of the discussion at CIA. Marchetti resigned in 1969, nearly a decade prior to the seminal disclosures by retired U.S. Army counterintelligence officer Jesse Marcel who, during a television interview in 1978, divulged that he had held in his hands wreckage from a craft “not of this Earth” that had crashed northwest of Roswell Army Air Field in July 1947.

Confirmation of this event originates with another credible person, USAF Brigadier General Arthur E. Exon, who has stated for the record that one or more plane-loads of that wreckage did indeed arrive at Wright Field (later renamed Wright-Patterson Air Force Base) shortly thereafter and was subjected to intense analysis by aeronautical engineers. During an audiotaped interview with Roswell researcher Dr. Kevin D. Randle, in 1990, Exon said:

…They knew they had something new in their hands. The metal and material was unknown to [everyone] I talked to. Whatever they found, I never heard what the [analytical] results were. A couple of guys thought it might be Russian, but the overall consensus was that the pieces were from space. Everyone from the White House on down knew that what we had found was not of this world within 24 hours of our finding it…Roswell was the recovery of a craft from space.2

All of Exon’s published comments regarding the matter may be read at roswellproof.homestead.com/exon.html.

A number of UFO debunkers have claimed that the Roswell UFO crash story is a “modern myth” that originated as a result of public fascination with the writings of Stanton Friedman, Bill Moore, and others in the 1979-80 time-frame, which incorporated Marcel’s candid remarks about his involvement in the discovery of the mysterious wreckage in 1947.

However, in light of Marchetti’s revelations, this simply cannot be true. Given his resignation from CIA in 1969, he had to have heard those high level “rumors” about crashed UFOs and dead aliens stored at Wright-Patterson prior to that time.

In his article, Marchetti theorizes that the primary reason underlying the U.S. government’s refusal to acknowledge the reality of UFOs, if indeed the craft are piloted by alien beings, results from its fear that existing power structures would be fundamentally undermined by such an admission. He writes:

…the U.S. Government, in collusion with other national powers of the Earth, is determined to keep this information from the general public. The purpose of the international conspiracy is to maintain a workable stability among the nations of the world and for them, in turn, to retain institutional control over their respective populations. Thus, for these governments to admit there are beings from outer space attempting to contact us, beings with mentalities and technological capabilities obviously far superior to ours, could, once fully perceived by the average person, erode the foundations of the Earth’s traditional power structure. Political and legal systems, religions, economic and social institutions could all soon become meaningless in the mind of the public. The national oligarchical establishments, even civilization as we know it, could collapse into anarchy. Such extreme conclusions are not necessarily valid, but they probably accurately reflect the fears of the “ruling class” of the major nations, whose leaders (particularly those in the intelligence business) have always advocated excessive governmental secrecy as being necessary to preserve “national security.” The real reason for such secrecy is, of course, to keep the public uninformed, misinformed, and, therefore, malleable.3

Given that so much information, misinformation, disinformation, speculation, and general bullshit about UFOs is available on the Internet, one must of necessity carefully choose which material to ingest. Marchetti’s unique, informed, credible perspective should be added to the short list of must-reads.