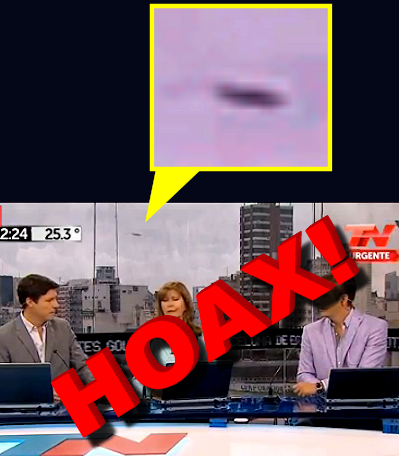 A UFO that was reportedly caught on videotape during a live news report in Argentina, apparently was not a UFO — it was a hoax. Today’s edition of cable news channel Todo Noticias (TN) reports that the so-called unexplained object didn’t even exist.

In fact, TN has released an unedited version of the original news broadcast and there is no UFO or any other object in the sky outside the window backdrop behind the news anchor desk where the “UFO” originally appeared.

While TN doesn’t offer an explanation as to who was responsible for the hoax, it released this statement on its website today:

“The truth is that the video was edited and the UFO was added digitally. Here we show you the original video, without editing, with the full minute from 12:24, the moment in which someone wanted to fabricate a UFO on the air at Todo Noticias.”