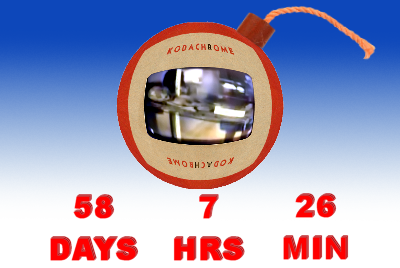 The impending fiasco involving the May 5th unveiling of the so-called “Roswell Slides” is moving forward unimpeded, it seems, despite harsh (and justifiable) criticism from a leading Roswell researcher, Dr. Kevin Randle, who notes that the promoters of the slides—Tom Carey, Don Schmitt, and Jaime Maussan—have made numerous unsubstantiated and highly misleading claims about them.

For those who have come late to this controversy, a cache of some 400 color photographic slides, taken in the late 1940s, allegedly, by then-married couple, Bernerd and Hilda Ray, were discovered several years ago—when, where and by whom is still uncertain, because the story keeps changing and key individuals remain unidentified. But, cutting to the chase, two of those slides show a small, thin body in a display case, an illegible placard at its feet, and the legs of an unidentified woman wearing a civilian dress visible in the background.

The slides’ promoters would have us believe that the diminutive figure in the glass case is the corpse of one of the aliens allegedly recovered from a crashed UFO, near Roswell, New Mexico, in July 1947. Consequently, they claim, the images are of revolutionary importance. Indeed, one member of the group, Tom Carey, has gone so far as to say that these two Kodachrome slides are the “smoking gun” proving that mankind is not alone in the universe.

Of course, the images are nothing of the sort. They are instead problematic artifacts associated with an incomplete and way-over-hyped research project, that is likely to become one of the most embarrassing missteps in a seven-decade-long effort by ufologists to gather and publicize data pointing to the reality of the UFO phenomenon and its probable extraterrestrial nature.

On February 24, 2015, I wrote to Mexican journalist Jaime Maussan, who will host the May 5th unveiling in Mexico City, saying, “In my view, the sign on the shelf next to the body is the key. Is there no decipherable writing on it in the original slide? If not, that image—not a copy—should be sent to at least half-a-dozen experts so that they might try to make the text legible. Has this already been done? If so, please elaborate. I have not read any commentary by any expert to date, regarding the sign.”

I then asked Maussan whether he thought that Carey and Schmitt had really done sufficient due diligence on the matter. I copied Tom Carey on the message. The next day, an obviously annoyed Carey responded to me and agreed that the placard “holds the key” to the identity of the body, adding that he and Don Schmitt had been trying to find someone to read the sign, using various filters and techniques. Despite that, said Carey, “not a single word” had been deciphered on the placard thus far.

He then mentioned that Dr. David Rudiak, and other unnamed persons, had attempted to solve the puzzle. Years earlier, Rudiak had analyzed a photograph of U.S. Army Air Force General Roger Ramey, who was photographed on July 8, 1947, squatting next to weather balloon wreckage. In Ramey’s hand was a Western Union telegram that seemed partially legible when blown up in size. Unfortunately, magnifying that small portion of the photo resulted in the type in the message appearing extremely blurry. Rudiak, according to many people, succeeded in deciphering that wording—although Kevin Randle disagrees—yielding, among other items, a reference to the “victims of the wreck”, presumably the crashed UFO.

According to then-Major Jesse Marcel—who had participated in the discovery of the mysterious wreckage in New Mexico and subsequently transported some of it to Ramey’s office at Carswell Army Air Field, in Texas—just before the photo was taken, the general had surreptitiously removed a small quantity of that unique material, which had been spread out on the floor, and substituted it with debris from a downed weather balloon, to help facilitate a cover-up of the actual nature of the retrieved craft.

In any case, at the present time, Rudiak has apparently been unable to make legible any words on the sign next to the “alien” body in the display case. Although Carey said that persons other than Rudiak had also been given the slides to examine, when I asked him to identify those individuals, he didn’t respond. Nor did he answer my question as to whether Rudiak had used the original slides for his analysis, or lower quality copies. This last point is obviously important, given that any text—either faint handwriting or commercial printing—would be somewhat degraded in second-generation duplicates.

I then wrote, “If your first group of experts was unable to decipher any words on the sign, that only points to the need to expand the scope of inquiry. I was a professional photographer for ten years and did scientific photography, among other work, at Northern Illinois University. I later worked as an electron microscopist for 14 years at Philips Semiconductors and routinely employed various image-enhancement techniques.”

I continued, “Given these qualifications, I can guarantee you that if the sign had writing on it (and why wouldn’t it?) techniques are currently available to make that text visible. I no longer have access to the required equipment or I would volunteer to take a crack at solving the puzzle. My point, however, is that perhaps your choice of ‘experts’ is the problem, rather than the availability of tools to do the work.”

I concluded, “Are the ORIGINAL slides going to be made available to the outside world—including qualified technicians—immediately after the May 5th event? If so, I predict immediate progress emanating from some quarter. Of course, the better, more scientific choice would be to make the ORIGINAL slides available to those technicians at this time, not after-the-fact. That’s my idea of due diligence.”

Given Carey’s non-response to my questions and suggestions, I can only assume that he will ignore my advice. That’s his prerogative, but when this whole affair blows up in his face—after the “alien” is identified as a human mummy, as I believe will eventually happen—Carey will not be able to honestly claim that he and his associates pursued every available avenue to identify the text on the placard.

Regardless, being a persistent person, I will use this opportunity to again strongly suggest to Carey, and Schmitt, and Maussan, that additional efforts be made immediately to decipher the writing on the sign, utilizing the expertise of still other persons, who might have other approaches to the problem.

I am guessing that most people reading this article would agree that my proposal is a valid one and that Carey’s palpable irritation with my earlier questioning of his diligence in pursuing a proper investigation should not be used as an excuse by him, or Schmitt, or Maussan to reject my suggestion out-of-hand.

I think all three of the promoters are sincere in their belief that the corpse in the Kodachromes is indeed an alien. I certainly do not believe that they are premeditatedly perpetrating a hoax, as a host of UFO debunkers have claimed. I also assume that they want the facts to emerge, whatever those facts turn out to be. But, when all is said and done, they have not yet provided anything resembling credible evidence that would confirm that the small body is what they claim it to be.

Of course, there are other problems with the whole Roswell Slides business, as Kevin Randle has pointed out. In the recent blog entry linked above, he mentioned an apparent lack of provenance for the slides and wrote, “[Regardless,] none of that explains how the Rays would have been able to obtain a picture of an alien creature. We all agree that if there was a crash and alien bodies were recovered, it would all be highly classified. I can think of no plausible scenario in which civilians, no matter how highly connected, would have had the opportunity to see, let alone photograph the body of an alien creature and get out of the room with their camera and film intact.”

Exactly! The fanciful speculation by those who contend that the Rays—if they did indeed know people in high places—would actually be given access to one of the bodies from the crashed Roswell UFO, is utter nonsense.

● Several ex-U.S. Army Air Force (AAF) personnel who were at Roswell Army Air Field in July 1947 say their superiors went to extraordinary lengths to retrieve every last scrap of the shattered UFO.

● Major Jesse Marcel, the first AAF officer to encounter the debris, in the company of rancher Mac Brazel, says that General Ramey did indeed replace a small portion of that exotic material with weather balloon wreckage so that it could be photographed as part of a public deception.

● Retired AAF Brigadier General Thomas Dubose says that a high-level cover-up of the Roswell event did occur, and was designed to keep the media away from the AAF recovery teams out in the field.

● A inquiry by the General Accounting Office, some 50 years later, determined that all records of telephone calls into and out of Roswell Army Air Field around the time of the UFO recovery had inexplicably disappeared.

● In the 1960s and ‘70s, U.S. Senator Barry Goldwater, also a U.S. Air Force major general with Top Secret clearances, was by his own admission repeatedly rebuffed when he tried to gain access to a facility, the Blue Room, at Wright-Patterson AFB, in which dead aliens were allegedly kept.

In other words, every effort has apparently been made by the U.S. government over the decades to keep the secret of Roswell SECRET!

In spite of that, the slides’ promoters want us to believe that the Rays—because they possibly had friends in high places—were allowed to view, even photograph, one of the already-autopsied aliens! Anyone who considers this ridiculous scenario to have merit is naïve in the extreme and simply does not understand how highly-classified, need-to-know matters are handled by the military.

For credible commentary on the Roswell Incident, one might read the revelations of the late U.S. Air Force Brigadier General Arthur E. Exon, who was at Wright Field, Ohio, when cargo aircraft carrying debris from the Roswell UFO arrived for analysis by aeronautical engineers.

During an audiotaped interview with Kevin Randle, in 1990, Exon said:

…They knew they had something new in their hands. The metal and material was unknown to [everyone] I talked to. Whatever they found, I never heard what the [analytical] results were. A couple of guys thought it might be Russian, but the overall consensus was that the pieces were from space. Everyone from the White House on down knew that what we had found was not of this world within 24 hours of our finding it…Roswell was the recovery of a craft from space.

General Exon was later the Base Commander of Wright-Patterson AFB. His published comments regarding the matter may be read here.

I will conclude by predicting, perhaps redundantly, that this affair will end badly for the Roswell Slide promoters. If, as I contend, the body in the slides is the mummy of an Inca child, or some such, then Carey, Schmitt and Maussan will owe the whole world an apology. They should also seriously consider returning whatever money they made as a result of their unfortunate, unfounded and misguided claims.