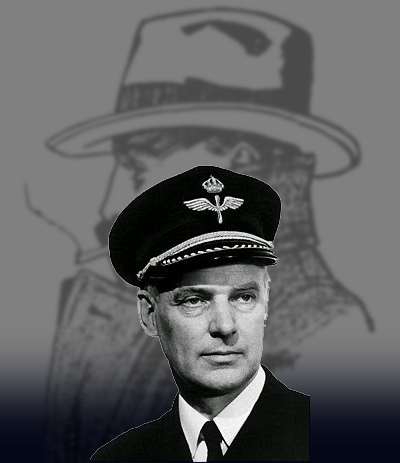 If you have more than just a passing interest in UFOs, then you have probably heard many times, the historical spectrum of events that make up the whole of UFO mythology. It began as many believe, in days past with extraterrestrial visitation to the great civilizations of Mesopotamia and Egypt, supplemented by periodic revisits through the millennia until the World War 2 era when the foo fighters arrived on the scene, followed by the 1946 Ghost Rockets and the 1947 Maury Island incident, Kenneth Arnold’s sighting, and the universally known, Roswell incident.

But the story I am about to tell you focuses on just one of these events – the 1946 ghost rockets and their inextricable link to a man who chose to engage in the second oldest profession in the world, espionage. That man’s name is Stig Wennerström, and in 1963 he was arrested in his native Sweden, accused of being a Soviet spy. Indeed, Mr. Wennerström, a well-known and liked Swedish Air Force officer, had been working as a Soviet spy since 1948, selling some of his country’s most valuable secrets to the Russians. When he was finally caught, the shock waves of his betrayal reverberated throughout Sweden and all the way to the United States as Mr. Wennerström had been posted during his traitorous tenure as the Swedish military attaché in both Moscow and Washington.

I am not going to recount Mr. Wennerström’s spying exploits on behalf of the Soviets, but instead on some spying that he did for the Americans, starting with a mission he was sent on in 1946.
The mission is detailed in a couple of books, one originally written in Swedish before being translated into English. In the book A Spy without a Country by H. K. Ronblom, the author details Wennerström’s mission on behalf of the Americans:

In 1946, the (Swedish) Air Force received an invitation-the first of its kind-to send its own representative to a Russian air display outside Moscow at which the new Russian jet aircraft would be demonstrated. Wennerström had had something to do with this business in its initial stages-it was his good friend, Lieutenant Colonel Rybachenkov of the Soviet Embassy who arranged the invitation-and it was he who was picked to attend on behalf of the (Swedish) Air Force.

Sometime in the summer of 1946, before he attended the air display in Moscow, Wennerström was invited (in Stockholm) to his friend’s the American air attaché. Among the guests was someone in civilian clothes whom Wennerström did not know, but this was soon put right when the man in civilian clothes introduced himself as an American intelligence service man and started telling Wennerström what the Gehlen’s organizational papers said about him.

The Gehlen organization was made up of remnants of Nazi intelligence that in the postwar period the Americans put to work spying against the new enemy – the Soviet Union. Wennerström was identified by the Gehlen organization as a “valuable contact” who during WW2 spied on occasion on behalf of Germany.

The American gave it as his opinion that anyone who had helped Germany might as well help the United States, since in both cases it was the Soviet Union the whole thing was about. The end of the conversation was that Wennerström was given a mission to carry out, of what nature does not appear from the published records.

In another book, An Agent in Place, author Thomas Whiteside fills in the gaps on this mission Wennerström was sent on by the mysterious American intelligence agent:

Next, the agent, by Wennerström’s account obviously aware of his coming trip to the Soviet Union, remarked on the opportunity he would have, as a neutral, to move about with comparative freedom, and proposed that he agree to mail a certain parcel in Leningrad on his way to Moscow. Wennerström told his interrogators that he accepted the assignment and mailed the parcel – which he understood to contain radio tubes, or some sort of equipment that might be used in a clandestine radio transmitter – without difficulty. On his return to Stockholm, he said, he had no further contact with the presumed American agent, and his close relations with both the American and the Soviet embassies continued pretty much as before.

Wennerström’s tale of delivering a package in Leningrad was considered implausible by author Whiteside who commented:

In any case, most sources, inside and outside the Pentagon, agree that, whether or not Wennerström actually was approached by an American agent in Stockholm in 1946, his story of his American Intelligence mission to Leningrad is, at best, a dubious one, and may very well have been part of an attempt to throw dust in the eyes of his interrogators. Such a mission, these sources say, would have been contrary to every security practice of American Intelligence.

Although Wennerström was hiding the real nature of his mission to Moscow, the details came spilling out in declassified American documents. On August 19, 1946, a Top Secret message from the US military attaché Moscow, Robert C. Macon to General Chamberlin of the War Department revealed that a Swedish Air Officer, Major S. Wennerström, was in Moscow on a 3 day official visit for a Soviet airshow and had information to share on the (ghost) rockets.

Wennerström revealed that 200 flying bombs had passed over Swedish territory traveling south to north, some on a zig zag course. Radar plotting indicated that most came from Peenemünde, but some from the Soviet Baltic coastal area. Only one curved east towards Norway while all others curved west. The missiles are not V1 but similar and slightly larger, are radio controlled, with no warhead except to self-destruct. They have been seen as high as 1000 and as low as 15 meters, travelling at 400 to 600 kilometers per hour and appeared to be under good control. The max plotted course was 1000 kilometers and could have been longer but there was no Swedish plotting station in the far north. No reports of missiles over Finland and have probably fallen in the Bothnia Gulf.

Extensive work in Murmansk for some launching project and Soviet wide-spread aerial mapping of the Kola Peninsula for possible mining of Uranium. The Soviets restored and are operating German underground experimental facility in the Hartz Mountains near Nordhausen.

On its face, this memorandum portrays Wennerström collegially just passing on information he gleaned from official Swedish sources to the US military attaché, but as it turned out, that was not the case. In another Secret memorandum dated August 23, 1946 from the U.S. naval attaché at Stockholm, William D. Wright, subject: Sweden Guided Missiles, the following very interesting observations are made about Wennerström’s trip to Moscow:

What is most interesting about this memorandum is the repeated use of the word ‘planted’ by the very astute and experienced-in-intelligence-matters attaché who could see right through what Wennerström and his Swedish colleagues were up to – what other Secret memorandum would reveal was the wholesale spreading of unsubstantiated rumors about the Ghost Rockets. What attaché Wright could not know at that time was that the true hand that was being played here was not Swedish but American.

By planting rumors of Russian missiles over Scandinavia that appeared to originate from Swedish intelligence but was ultimately directed by elements of American and quite probably British intelligence, the Soviet Union was blamed for flagrant violations of the sovereign airspace of its neighbors, creating a media storm and backlash of world opinion that has since been immortalized as unexplained UFO events.

So as not to muddy the story any further of what is a complex intelligence operation, I have left out many details that confirm the dangerous deception game that was being played out by Wennerström and others in 1946 Sweden, details that will be included in the rewrite of my book The Rosetta Deception, freely available online at http://rosettadeception.blogspot.com .

After sifting through all of the evidence related to the 1946 Ghost Rockets, especially the official declassified documents that have come out of US and British Government archives, only one conclusion can be drawn from the data – 1946 had zero to do with alien visitation and 100 percent to do with cold war intrigue and deception of the human kind, but it took a spy coming in from the cold for the pieces of this jigsaw puzzle to fall into place.