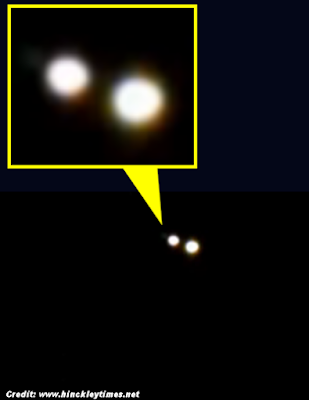 An off duty police officer, an AA patrol officer and a dog walker all witnessed two flying orbs that are being investigated by a UFO network.

The first person to come forward about the orbs was a 41-year-old woman from Earl Shilton, who spotted the two balls of bright white light floating in the sky above Barwell on February 3 .

The woman, who managed to capture video footage of the unidentified flying objects on her mobile phone, was woken by a strange noise at 4.50am.

When she looked out of the window she watched the spheres of light for around a minute.

They merged into one another and moved side to side before shooting off at speed. . . .