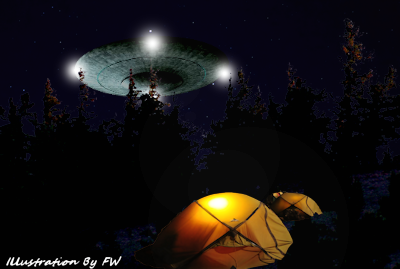 A New Mexico witness near Cimarron recalled a UFO event from 1978 when a disc-shaped object hovered 25 feet off of the ground with four glowing, round lights, according to testimony in Case 63904 from the Mutual UFO Network (MUFON) witness reporting database.

The events took place at Miners Camp, Philmont Scout Ranch, in Cimarron, on the night of July 4, 2008.

“There were about 12 to 15 hiking crews with their tents set up in one area,” the witness stated. “Each crew is up to 12 people.”

The witness woke up about midnight and observed the object near his tent about 50 feet away.

“It was a round, flat object, about the diameter of a car tire. It was moving slightly up and down and around in what could be described as hovering.”