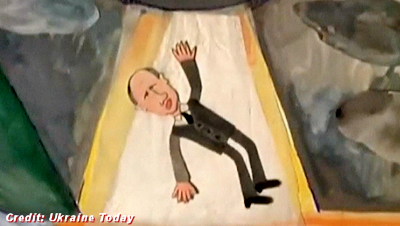 An animation studio in Kyiv has turned Ukrainian children’s drawings into a cartoon showing the abduction of Russian President Vladimir Putin by aliens, take a look.

The animation entitled ‘UFO over Kremlim’ was initially created as a gift to Ukrainian servicemen stationed in the east of the country as many Ukrainian volunteers write letters and prepare gift packages for soldiers battling pro-Russian separatists.

The children’s animation studio recently uploaded their cartoon onto a social media website, garnering tens of thousands of views online.

15-year old student Nikita Golomutko, who has been with the studio for two years, says the four part animation series is a portrayal of Russia wanting to take control of Ukraine.