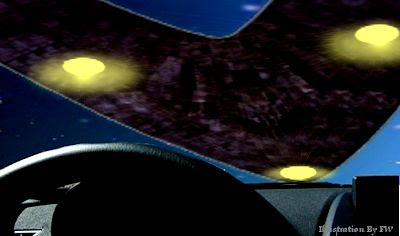 I was messing around online, a few days ago, when I noticed a comment made by someone on another website. They mentioned being in Phoenix and being a witness to the 1997 Phoenix Lights.

I took a moment and e-mailed the person, asking them if they would give me a precise account of their experiences. Today they responded and this is what they had to say about it:

My family and I recall that night often. I had only lived in phoenix for about a year, year and a half at most. We were living on williams airforce base when we saw it. We actually saw it from two vantage points though. Williams was the second.

We were at my aunts house when we first noticed it. That was about 10 miles to the north north west (roughly) near Mesa Dr. and I forget what other road. There was a middle school nearby my cousin went to. Anyway, it was just after sunset, or so it seemed, I was still young. My cousin John Doe spotted it and called me outside. Then i saw it and called out my dad and broth (sic).

It was very large to my memory. Not as high as a jumbo jet or anything, but it was at least 5,000 feet up and massive, in the shape of a V made out of lights. They weren’t regular sized lights, they were relatively larger than stadium lights while standing at the bottom of the pole they are mounted on, but thousands of feet in the air and not extremely bright either. They were more like a yellow, old school street lamp as it looks through a rainy fog, maybe even distorted, but you could dismiss that as being mesmerized at the time. . . .