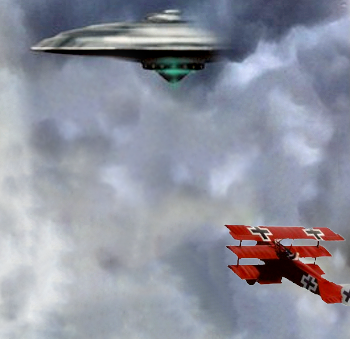 WORLD War One, London: a German airship is pounding the capital with bombs.

Several aircraft are scrambled to attack the enemy raider.

But as well as the giant Zeppelin a mysterious object is seen in the sky by the British pilots.

“One of them described it as looking like a railway carriage with the blinds down,” says Nigel Watson, who has investigated the century-old sighting.

“One pilot took some shots with his revolver but the object flew away out of range.” . . .

Red Baron Shot Down UFO Over the Trenches