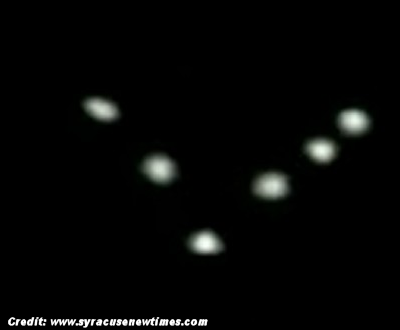 Who knew that on a lazy summer’s evening, a Long Island family would witness the V Formation of UFOs.

Harry and his parents lived in Oakdale, NY in the Great Neck river valley area. It was about twilight in mid-July 1954 and Harry’s dad was finishing some yard chores. Young Harry’s mom had just called him in the house to get ready for bed. He tells us that he’d only been inside for a few minutes when his father “burst” into the house yelling, “Everyone come outside quick you have to see this!”

Harry says that when he got outside his dad grabbed him by the shoulders and turned him around abruptly. There to the right of our house up in the black night sky were three luminous disc shaped objects, traveling very slowly from East to West. Harry became so scared that he ran back into the house as fast as he could. His father came right after him. His dad picked him up saying, “…you have to see this… you may never see anything like this again in your life.”

As the two got back outside the discs had moved so that their house obscured their view. Harry’s dad moved over to their driveway to get a better look. Father and son watched and marveled at the sight that they were witnessing. . . .