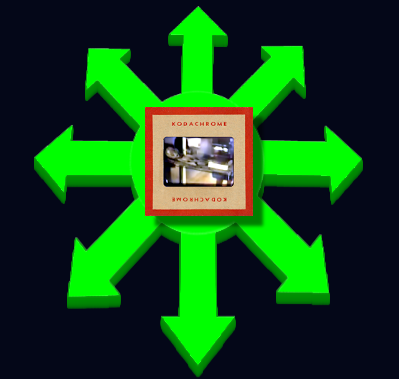 I have said for a long time that one of the major hurtles in this slides controversy is the lack of provenance. According to the various inside sources including Tom Carey, Tony Bragalia and even Adam Dew, they simply don’t know who took the pictures, when they were taken and where they were taken. To make matters worse, there is no solid chain of custody for the slides. There are gaping holes in this important part of the story.

Back on February 20, 2015, Adam Dew, under the user name SlideBox Media, posted to Rich Reynolds UFO Conjectures blog the following:

A quick timeline as I understand it: Hilda died in 1988. Slides were discovered when emptying out a garage outside of Sedona (Cottonwood we think) in 1998. Slides were deemed interesting (obviously old color slides) but not fully examined until around 2008. While I think that the home may have belonged to Hilda’s lawyer, there is no way to know for sure as the woman who found them [the slides] didn’t keep records of the homes she cleaned out… I don’t think the slides came from Hilda’s home.

Could this be any vaguer? The home might have belonged to Hilda’s lawyer but they don’t know. The house might have been in Sedona, but they’re not sure. There is no way to verify whose house it was and there is little to link the slides to Hilda Ray other than some of the other slides were marked with her name. He doesn’t think they came from Hilda’s home.

And with that we return to the question of provenance. They have absolutely nothing to go on given that statement. By comparison, the Ramey Memo has a provenance that is iron clad. No, I don’t want to discuss the various interpretations of the memo; I just want to establish how solid a provenance can be.

General Ramey is in the picture holding the document in question. J. Bond Johnson, the man who took the picture has been interviewed repeatedly about it, and while he certainly slid off the rails as time passed, there is no doubt that he was in Ramey’s office and he took the photograph. Even without his statements we would know this because the picture was transmitted over the news wire (INS) back in the day. Attached to the picture from the Bettmann Photo Archive, was a noted that it had been sent at 11:59 p.m. on July 8, 1947. Even if we didn’t have this, the picture had been published in various newspapers on July 9, 1947. The negative, which can be matched to picture, was stored at the Fort Worth Star-Telegram until it was given to the Special Collections at the University of Texas at Arlington so that the chain of custody has been preserved as well. I can’t think of another document dealing with the Roswell case that has such a provenance or chain of custody.

But you can see the difference. With the Roswell Slides, all that information simply doesn’t exist and I don’t know how you can ever gather it given what the current owner of the slides says. The chain of custody is broken in several places and because Dew has not revealed the name of the woman who supposedly found the slides so that she could be interviewed by independent researchers (and I doubt that he will give up the name) then that is just one more hole.

So why do we believe that these slides show alien creatures recovered outside of Roswell? Well, the film was apparently manufactured in 1947 which is not to say that it was exposed in 1947. The slide holder was used from something like 1940 to 1949, which opens up the range. Photo experts have suggested that the range could be even greater, though that isn’t much of an issue given all the other problems.

I have yet to hear a good reason for looking at these slides which were unlabeled and apparently separated from the others in the collection and concluding that they showed an alien body. If you’re the average guy, sitting out there looking at the slides and see a strange body on them, I don’t see how you can (a) conclude they are of alien creatures and (b) that they have anything to do with Roswell. The Rays lived in Midland, Texas and not Roswell and the slides were found in Sedona and not Roswell and are now in Chicago. Right now we don’t even have a good chain of custody from Sedona to Chicago.

This also generates another question that can be easily answered. Were all the slides in the box stamped with Hilda Ray’s name? Were others stamped with her husband’s? And if so, then how do we conclude that the slides belonged to the Rays other than proximity? Or I should say alleged proximity.

At this point, with Dew making so many claims, it seems that there is no way to provide a provenance or chain of custody. Any such attempt will be seen in the same light as that of Ray Santilli as he continued to change the story about who had owned the Alien Autopsy film and how he had come into possession of it. Dew has sort of locked in the tale of a house owned by someone, that was cleaned by someone who found the slides, which sat around for basically decades before anyone got around to looking at them and then deciding they showed an alien creature, an amazing deductive link.

This could spell the end of the slides saga simply because there is no way to verify how they came into existence or why those who saw them originally assumed they showed an alien creature. Without the important questions of provenance and chain of custody answered, there is no real reason to assume the being on the slides has anything to do with the Roswell case, or that it is an extraterrestrial creature. This is basically the same stumbling block that so many of us interested in the case have encountered before and there is no reason to assume that anyone outside of the UFO community is going to care about this… and there might not be that many inside who do. . . .