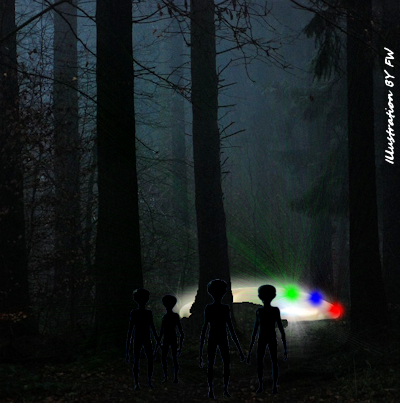 A witness who served with in a West German weapons platoon for the U.S. Army recalls events from 1966 when a UFO landed near their training mission camp and entities were seen on the ground, according to testimony in Case 63699 from the Mutual UFO Network (MUFON) witness reporting database.

The events played out in Grafenwöhr (Grafenwoehr) West Germany during the summer of 1966. Grafenwöhr was a major training area for N.A.T.O. forces and located close to the Czechoslovakian border.

The story is told here in the witnesses’ own words:

. . . “When two of the three men watching the star the previous night went to bed, the guard went toward the wood line, where we had set up camp. The guard then turned toward a clearing to the west of camp and said a craft had landed there in front of him. It had numerous lights of changing colors all down its side.

“The guard saw three figures emerge from the craft. The figures didn’t walk on the ground – they seemed to be floating just above the ground and bobbed side-to-side. The guard yelled for them to halt. When they didn’t stop, he thought about turning on his flashlight, but something in his head said ‘no’. The guard grabbed an aiming stake and tossed it at them. The guard was carrying a rifle but no live rounds were issued because they were not on a range at the time.

“He kept hearing a voice in his mind that said, ‘Don’t be afraid, we won’t hurt you.’ The guard heard one of the beings in the woods behind him and felt he was being trapped so he ran away. He came upon another group of GI’s some distance away and told them his story. He pleaded with them to come to our position and they wouldn’t. They assumed he was intoxicated on something.

“He stayed with them until morning and then came back toward our position. Looking down a hill he saw a silvery, cigar-shaped craft still where it landed the night before. He ran back to the other GI’s and again begged them to come with him. They again refused to come. . . .