Ancient civilizations – Inca mummies: More than 1,000 years ago the pre-Inca baby was laid to rest on a Peruvian hillside. 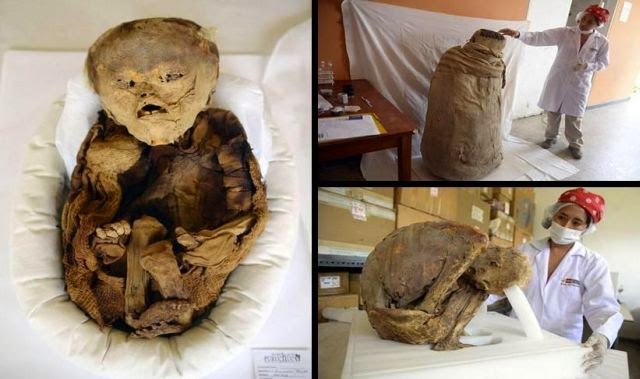 It was among dozens of well-preserved mummified skeletons found by archaeologists on the outskirts of the capital city of Lima.

The discovery was made by experts who were hired by the Government to search the hillside for any remains prior to the building of a new road. Three days into the project the archaeologist came across the cemetery, according to National Geographic News.

‘By now we have over 40 (mummy bundles) and the number increases every day.’ Guillermo Cock, a Lima-based archaeologist, reportedly told the website.
The latest discovery was made close to Puruchuco-Huaquerones – the largest Inca cemetery ever excavated. In total the team located around 26 tombs, containing both children and adults.

One of the most famous to ever be uncovered was ‘Juanita the Ice Maiden‘, a girl preserved in ice on a mountain.

Earlier this year one body found in southern Peru was so well preserved that it had an eye intact.