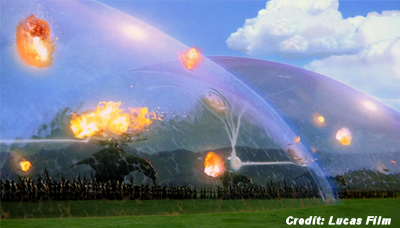 Aircraft and military manufacturer Boeing has been granted a patent on a system that is designed to prevent explosion shockwaves from harming a target.

A new patent granted to aircraft, defense and security company Boeing is taking its cues from science fiction. Just like the glowing energy shields seen protecting troops, machines and even spacecraft in Star Wars and Star Trek, the design — named “Method and system for shockwave attenuation via electromagnetic arc” — uses energy to deflect potential damage.

As it is described, the system is not designed to prevent direct impact from shells or shrapnel; rather, it is designed to protect a target — such as a vehicle or building — from the damaging effects of shockwaves from a nearby impact. . . .

DARPA Advances Electronics That Fight Infection and Dissolve Away | VIDEO