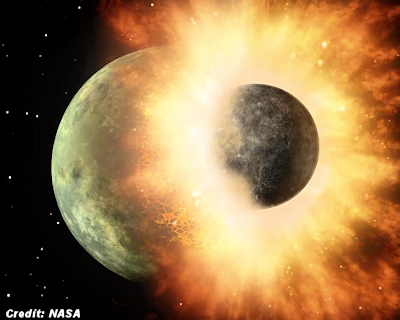 New experiments show that the asteroids that slammed into Earth and the moon more than 4 billion years ago were vaporised into a mist of iron. The findings, published in Nature Geoscience, suggest that the iron mist thrown up from the high velocity impacts of these asteroids travelled fast enough to escape the moon’s gravity, but stayed gravitationally stuck on more massive Earth. And these results may help explain why the chemistry of the Earth and the moon differ.

When and how Earth’s metallic core formed is uncertain. Clues come from known differences in the preferences of certain elements incorporated in the silicate mantle or the metal core. In a mixture of silicate rock and iron metal, the atoms of certain elements, such as gold and platinum, tend to prefer to enter the metal, while others, such as hafnium, prefer the silicate.

As Earth’s iron-rich core formed it “sucked” the metal-loving elements out of the planet’s rocky mantle. . . .