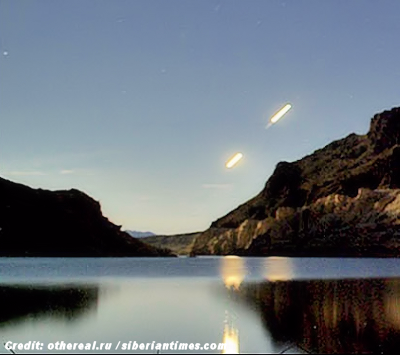 Since ancient times, the vast Lake Baikal has been known as deeply mysterious, but in the closing years of the Soviet era, and since, it has been the location of a number of alleged sightings of aliens and UFOs.

Initially these were covered-up by the authorities of the USSR, but later they were revealed by the Russian media.

In recent days there have been unconfirmed reports in Russia that American director Steven Spielberg is planning a documentary based on these weird and unexplained accounts. At the time of writing, this appeared to be a hoax, though it was unclear who planted stories in the Russian media.

True or not about Spielberg’s interest, the lake is perhaps the biggest focus of UFOs in Russia.

The versions of extra-terrestrial activity at Baikal – edged by mountains and containing one-fifth of the world’s unfrozen freshwater – relate to supposed aliens seen by military divers in its depth, and large ‘spaceships’ hovering over its grey, moody expanses. . . .

Something Fell From the Sky in the Village of Новобурейском