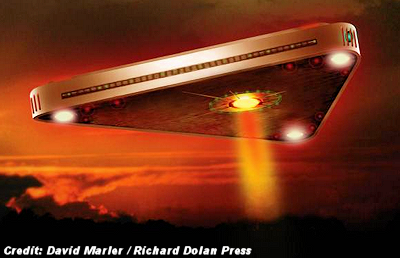 When it comes to The Great Taboo, everyone’s got an angle. Few are as unique as David Marler’s specialization bonanza — Triangular UFOs: An Estimate of the Situation

— which came out in 2013. Relentlessly, perhaps obsessively, informed, Marler’s profile of the triangles is remarkable for its historical depth as well as its dogged and exhaustively-sourced quest for baseline details. In fact, it may be the most cogent and challenging account of the ongoing mystery since Leslie Kean’s UFOs: Generals, Pilots and Government Officials Go On the Record

Initially intrigued by the 1989-91 Belgian UFO wave, Marler plunged headlong into the controversy following the southern Illinois sightings of Jan. 5, 2000, which became famous for, among other things, igniting befuddled radio chatter among multiple police departments (see below). His family also has a riveting personal back story that no doubt greased the skids for his curiosity. Anyhow, last weekend at a Florida MUFON meeting in Valrico, Marler made his pitch for a centralized and accessible digital database. As he informed nearly 70 listeners, those who suspect classified military technology is the culprit may be in for an ice bath. Marler states the first documented discussion of observable triangles appears in — wait for it — an 1882 edition of Scientific American. More than a century ago, astronomers claimed to have detected “triangular luminous appearances” traversing the glow of the moon. Marler fleshes out additional 19th century references, as well as 20th-century triangle encounters observed generations before stealth designs were factored into the U.S. arsenal.

Almost as amazing as the voluminous compendium of incidents is the mind’s-eye image of Marler — or practically anybody, actually — sifting through reams of ancient newspaper, magazine, and journal articles to stitch these narrative threads together. But here it is:

An International News Service piece about 300 West Berliners reporting triangles above the divided city in 1953; Texas sheriff’s deputies reconstructing a highway game of cat-and-mouse for the Houston Chronicle in 1965; law enforcement agents relating tales of a “pyramidal UFO” to the Memphis Press-Scimitar in 1977; multiple witnesses, including a named FAA air traffic controller, detailing for California’s Auburn Journal how a delta-shaped object followed a major freeway in 1978; “hundreds of residents” from Kansas to Missouri witnessing a triangle event in 1980 and chronicled in Missouri’s Express & News daily; Fort Worth’s Cross Country News recording how “hundreds of sightings” of triangle-shaped objects erupted across Florida, Georgia, Ohio and Michigan during two days in 1975 — this stuff goes on and on and on.

In short, said Marler, who began to have suspicions about military candor during his formal requests for radar data on the 1/5/2000 Illinois case, in reviewing more than a hundred years’ worth of reports, “We don’t see an evolution in the technology of triangular UFOs . . . We’re dealing with a tangible phenomenon that’s been around for a long time.”

The licensed hypnotherapist offered some broad characteristics about triangle-class UFOs:

The overwhelming majority are nocturnal and silent. Landing cases are virtually non-existent. More often than not, they’re seen cruising speeds at below-radar altitudes, but they can rapidly accelerate. The suckers are large, averaging 200-300 feet in length. They can hover and make sideways right-angle turns without banking. They can move in non-aerodynamic fashion, broad edges forward, tapered edges aft. Superstructures are sometimes observed, as well as shape-shifting properties. In fact, according to unfiltered National UFO Reporting Center surveys, categorically speaking, triangles trail only “lights” in eyewitness volume. In a 2012 listing of configurations, in fact, flying-saucer discs don’t even rate a bronze.

“What we need,” Marler said in an appeal for more volunteer investigators, “are more bodies in the field” to gather data. After all, say MUFON officials, a revolution in optical technology with the potential to generate mountains of evidence is right around the corner. More later on that.