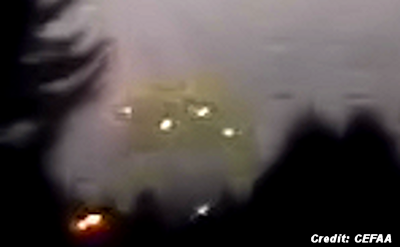 The weeds of curiosity

CEFAA, Chile’s federal UFO study project, recently brought its resources to bear on a September 2012 incident over Santiago. The cell phone videos were poor quality and the object(s) left no radar clues. But government researchers, operating under the auspices of Chile’s equivalent of America’s FAA, evidently felt compelled to check this one out because of its audacity, unfolding as it did near that nation’s Air Force War Academy. Not to mention the animation in the witnesses’ voices recorded during the event.

Author Leslie Kean published a summary of CEFAA’s report last week at Huffington Post. Three witnesses, two civilians and a career air force sergeant, saw five nighttime lights make an approach the Academy from the mountains. Their original horizontal formation split into a triangular array, reformed as a circle, and then quickly departed. All reported dramatic color shifts during the fly-by, but the sergeant’s story was the most detailed. He described seeing “an oval shape, like a submarine; the upper part had windows with lights coming out … with a dome or something like it.” But what elevated this relatively unremarkable anecdotal encounter from multitudes of others was the time and effort an interdisciplinary lineup of Chilean officials invested in trying to figure it out.

Weather conditions were eliminated from the suspect list, as were conventional aircraft and interference from ground-based light sources. Consequently, CEFAA declared the event an “anomalous luminous phenomenon,” which is about as neutral a phrase as could be applied to an incident whose characteristics are consistent with a display of intelligence/high technology. Anomalous luminous phenomenon is a fancy way of saying “We don’t know,” which is a sane and welcome contrast to Uncle Sam’s fidgety aversions, denials and inventions when confronted with The Great Taboo. Better yet, there were evidently no repercussions for the eyewitnesses, no job insecurities, no (apparent) negative press, no institutional credibility collapse for failing to be omniscient. But this is the sort of climate CEFAA has been nurturing since its inception in 1997.

Five years ago, in fact, two of CEFAA’s top operatives — Ricardo Bermudez Sanhueza and Rodrigo Bravo — called for coordinated global dissemination of UFO data, most likely through United Nations channels. While the UN and its ferocious competing interests often rate raspberries for staging so much futile theater, it’s hard to imagine how any country could exploit The Great Taboo for nationalistic rhetoric. (Well, OK, it’s not that hard. Kim Jong-un: “Bandits breaking the laws of physics will encounter a resolute people’s wall of fire at the borders of our sacred space”.) Still, for broader approaches to breaking the UFO gridlock, it’s worth taking a look at some multinational ideas published by the American nonprofit National Aviation Reporting Center on Anomalous Phenomena in 2010. Even more specifically, a retired Belgian air force general noted that a logical UN channel — the International Civil Aviation Organization — is already in place. Or, failing that, try the International Air Transport Association based in Montreal.

The key to making it work, obviously, will be the erosion of American resistance, mired in an endless current of updates on rapidly multiplying exoplanets and exposure to alternative media coverage — from the insipid to the provocative — on The Great Taboo. The stigma is losing its grip; like attitudes on gay marriage, weed, and race, everything changes. Suppressing the reality of an experience runs counter to human nature. Most U.S. pilots, for instance, are loathe to go public with their encounters, yet scores have filed reports with groups like NARCAP and the National UFO Reporting Center in exchange for anonymity. Once upon a time, a guy like Andrew Danziger might’ve taken his 1989 UFO sighting to the grave. But in April, the pilot who flew candidate Obama on the 2008 campaign trail decided to spill the beans. And a full month later, Fox News(!) actually followed up(!) with a live interview and played it straight(!).

Things are happening, in small but significant ways. Countries like Chile remind us that things do not fall apart when we confront the holes in our knowledge, however impossible or irrational that evidence may appear.