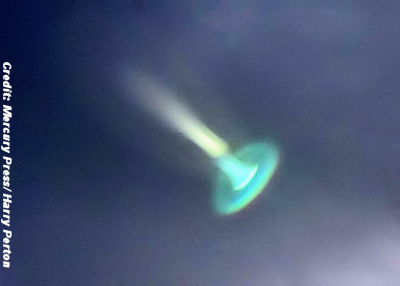 A photographer has taken a photo of a ‘jellyfish UFO’.

. . . The photographer only noticed the UFO, which is named after a jellyfish because of its appearance, when he got home after taking pictures in the storm.

‘I was taking photos and suddenly something flashed,’ he said.

‘I decided it must have been a strike of lightning – but back at home I saw something strange in one of the photos that I took – what looked like a UFO.’

The image, which shows an object floating in the night sky and emitting an eerie flash of green light, sparked a flurry of online debate about what it could be. . . .

UFO, Videotaped By a Netherlands Resident

UFO Caught On Video Near Waddenzee in the Netherlands | VIDEO

“. . .The Blitz Was The Result of a Falling Satellite or UFOs”