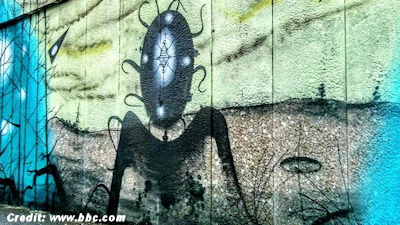 Sightings of a mystery object in the skies above Wiltshire 50 years ago have been immortalised in a mural.

The reports of the UFO, known as “The Warminster Thing”, came from many people who heard mysterious sounds and saw objects in the night sky in 1965.

The mural, by a “secret” artist, was organised by the Warminster Information Centre which said the “utterly unique event” should not be forgotten.

The artwork is on the old police station wall by the information centre. . . .