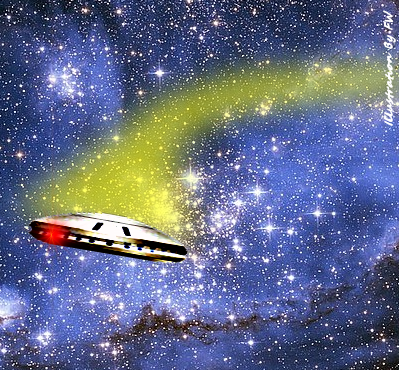 If we deduce from the mountain of evidence that some flying saucers come to earth from near-by solar systems (there are one thousand stars within fifty-five light years, forty-six of which are like the sun), we are immediately faced with two questions:

1). How can a spaceship travel from a near-by solar system to earth in a reasonable time?

2). Once here, how can flying saucers behave the way they are observed to behave?

How do they achieve their reported high speed flight in the atmosphere (thousands of miles per hour), their ability to stop and start abruptly, to move up and down back and forth seemingly with none of the limitations of conventional aircraft? Typically there are no external engines, wings or tails. Usually the objects are relatively silent compared to conventional craft, and a variety of physical and psychological effects are produced on living and inanimate objects in the vicinity. These are the truly technological challenges we face.

The problem must be divided into two parts because there is no good reason to assume that the same propulsion system is used for the long haul and local portions of the trip. It seems reasonable to assume that the huge cigar-shaped “mother ships” into and out of which the smaller disc-shaped craft fly, are the interstellar vehicles and the others are “Earth Excursion Modules” for local travel only.

Mother ships are rarely observed cavorting or flying close to ground level. In Ted Phillips huge collection of trace cases more then 90% of the low-level vehicles are “disc-shaped.” A useful analogy here is the Aircraft Carrier Enterprise, which is nuclear powered and operates at low speed for many months and or years on the surface of the ocean. The much smaller aircraft it carries cannot operate on the ocean but can fly at high speed and altitude for short periods and are highly maneuverable; but they are not nuclear-powered and neither craft could replace the other.

The problem of traveling to the stars must also be viewed from an entirely different perspective then is useful for understanding our recent flights to the moon and flights of instrument packages to other planets. Distances within the solar system can be measured in light seconds, light-minutes, or at most in a few light-hours. Stars at least several light-years away; our chemical rockets carry our astronauts to the moon in about sixty-0nine hours, and the Viking Spacecraft to Mars took about ten months to reach its destination. But they are propelled by forces other then gravity for only seventeen minutes or one hour respectively. The rockets are coasting or slowing down until they are close to the target for almost the entire trip.

The Apollo spacecraft, at an altitude of two hundred thousand miles, is only going two thousand mile per hour although it left the earth going twenty-five thousand miles per hour. If it had been able to accelerate at just one G (a twenty-one-mile increase every second) for just one hour, the final velocity would have been 79,000 mph; for just one day it would have been 1.9 million mph! Peak acceleration during an Apollo launch is actually closer to eight G’s (a 168-mph increase every second).

To understand there forgoing a bit better, note that the acceleration of one G at the surface of the earth equals 32. 17 feet per second, which in turn means that as each second passes velocity is increasing an additional 32.17 feet.

In just one day at one-G acceleration a velocity of almost two million mph would be reached and the craft would be far out of earth’s gravitational field. For each operation near the earth, gravity effectively pulls the craft at 1260 mph; while in space there is practically no gravitational or atmospheric friction. It is extremely important to recognize that it take approximately one year at one G to approach the speed of light—about 670.000,000 mph—and we can speculate that any space travelers may have refueling or rest and relaxation centers at locations between the stars, so that our earth visitors need not have come directly from their home planet.