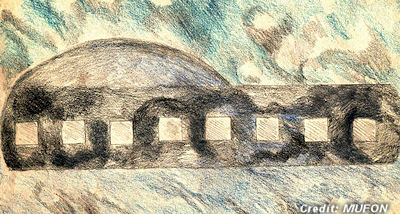 A Florida witness at West Palm Beach reported watching a silent, low flyng, cigar-shaped UFO that hovered in place before just disappearing, according to testimony in Case 65944 from the Mutual UFO Network (MUFON) witness reporting database.

The witness was outside walking her dog at Okeeheelee Park about 11:49 a.m. on May 29, 2015, when the object was first noticed.

“It was a very quiet morning,” the witness stated. “The sky was so beautiful because of all the different kinds of clouds and the weather was warm and breezy out of the east. I happened to look up towards the sky at 11:49 a.m. and saw this huge object over Okeeheelee Golf Course that is just to the east of where I was walking in the park.”

The witness tried to identify what the object was.

“I was thinking this is a huge strange kite? Blimp? I have seen many different types of planes, helicopters, blimps, drones, kites, etc. to know it was not anything like that. PBI and some heliports are not far from Okeeheelee Park, so you see aircraft every day.”

“The object was cigar-like in shape, but it had like a dome/bump on the top half of it. Also, it looked like a row of windows on the side. What was really interesting is that it did not move or make any type of sound. I was about 500 feet away; and for its size you would think you would hear sounds like aircraft make.” . . .

UFO Spotted Over I-5 Freeway