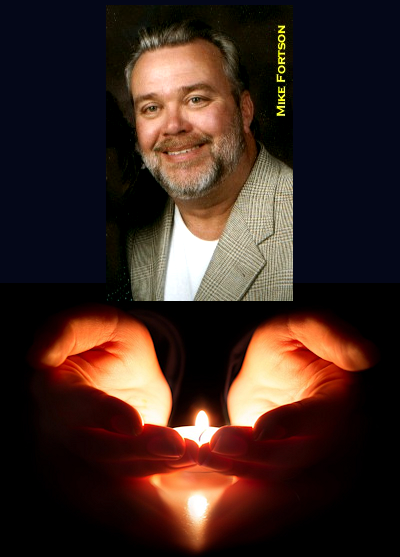 Mike Fortson, my dear friend, colleague, regular contributor here at TUFOC and direct eyewitness to the large v-shaped craft that flew over Arizona in ’97 (AKA The Phoenix Lights) died from cancer last Sunday, May 31st (2015).

I believe it has been over ten years since I first sought Mike out concerning he and his wife’s sighting of a huge v-shaped craft that would (erroneously) be labeled, The Phoenix Lights; in short order—we became close friends. Mike called me “his best friend that I’ve never met,” something his beloved wife Nanette reminded me of when I spoke with her on the phone today—the feeling was certainly mutual.

In a multi-part e-mail interview I conducted with Mike that began back in 06, I asked him to share some background with our readers, he replied as follows:

I was born February 24, 1953, in Hertfordshire, UK. My parents are both Americans from Indiana. My father was a staff sergeant in the USAF stationed in London. I spent the first 18 months of my life in England, then Georgia for 5 years or so. Then in 1959 we moved to Kokomo, Indiana where I spent the next 16 years.

I graduated high school in 1971 and unfortunately my lottery number for the draft (Viet Nam) was under 60 and I was headed into the military. Lucky for me my test scores were high enough that the US Navy took me with a 4 year enlistment. During boot camp I was asked if I would be interested in the USN Ceremonial Guard in Washington, D.C. I said, “yes”. I spent my entire Navy career (4 years) in DC doing military funerals in Arlington National, state dinners at the White House, participated in full honor arrivals for foreign heads of state. Highlights included; Nixon’s inauguration, funerals for Presidents Johnson and Truman. I participated in over 1500 military funerals in Arlington National. I had a White House security clearance.

I have been in sales since I got out of the Navy in 1975. In 1979 the auto recession pushed us out of Indiana and we were part of the rush to Texas. I worked in the oilfields until 1986. When oil dropped to $6 a barrel and we loaded up again and moved to Arizona. I now sell real estate in Prescott Valley, Arizona.

As I explained to Nan earlier today, the reality of Mike’s passing is just setting in, and to say I was taken aback is understatement. In the days to come I will attempt share some thoughts and we will be republishing some of Mike’s work in his honor.

In the mean time we offer our most sincere condolences to his beloved wife Nan and all of the family. I loved him like a brother and will miss him dearly.