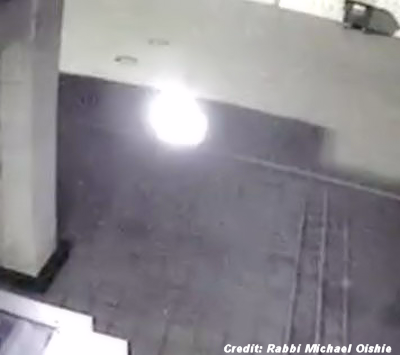 A BIZARRE floating light which shows “aliens or ghosts” was caught on camera at a synagogue – just days after a similar sighting at a Buddhist temple.

Jewish rabbi Michael Oishie was so baffled by the orb seen on CCTV footage that he posted it on Facebook for help solving the mystery.

The light appeared at around 4am and hovered in the car park for just about 20 seconds before disappearing.

He posted alongside the video: “Watch carefully what visited our Zaporizhia synagogue today around 4 in the morning.”

The sighting happened at a new synagogue in Zaporozhye in south east Ukraine and got UFO and alien believers in a flurry of excitement.

One woman responded and said it looked “extra-terrestrial or paranormal”. . . .