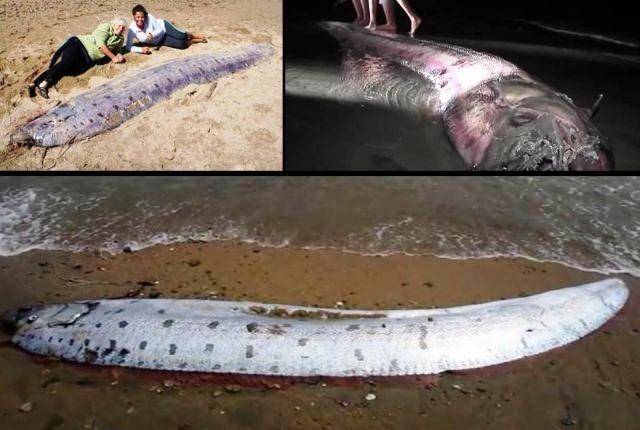 It’s the fifth of the mysterious deep-sea creatures that have been found along the California coast since last spring.

David Chan, director of the Pennington Marine Science Center told to nationalgeographic “The fish could have been even longer, but it appeared to be missing its tail, but missing tails aren’t unusual for oarfish, The animals are able to pop them off in a process known as autotomy. It’s similar to the way certain lizards can amputate their own tails when threatened with a predator.”

The giant oarfish was first described in 1772, but it has been rarely seen because it lives at considerable depths, around 3,300 feet.

In Japan, oarfish have long figured into folklore. The oarfish there is known as the “Messenger from the Sea God’s Palace” and according to traditional belief, if many of the fish wash up, it may signal a coming earthquake.

According to Japan Times, there could be some scientific basis to that story, even if scientists don’t currently use fish behavior to predict tremors. Kiyoshi Wadatsumi, a scientist who studies earthquakes at the nonprofit organization e-PISCO, told the paper, “Deep-sea fish living near the sea bottom are more sensitive to the movements of active faults than those near the surface of the sea.”