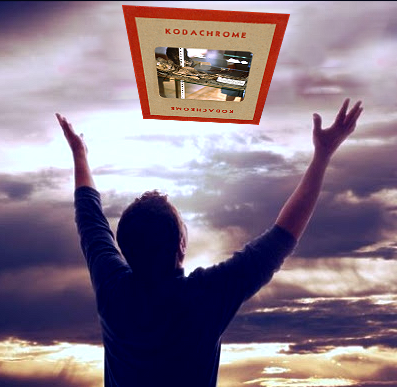 One would think that the mystery was solved concerning the Roswell Slides. Definitive proof was offered that the slides depicted the mummified remains of a two year old child in the settings of a Colorado museum in Mesa Verde. This coming about by deblurring the placard associated with the mummy. But apparently this is not how professional UFO researchers go about their business. There appears to be another aspect to their research…rebranding the product.

For the past few weeks, all of those responsible for this sordid affair have hitched their respective horses to a new hypothesis: “The mummy is not that of a child, but that of a mummified ET and that it is possible that disinformation agents had intentionally produced the language on the placard as a means of misdirection.”

This is a rather convoluted approach, but highlights the powerful aspects of the “will to believe.” The US government falsified the placard writings to hide the fact that the mummy was actually that of an alien, yet allowed this historical find to go on display for the general public to view. I assume this could be construed as “hiding in plain sight.”

According to Jamie Maussan, et al, the bizarre appearance of the mummy continues to baffle his medical “experts.” The bizarre physical appearance apparently has led these so-called experts to conclude that the mummy can’t possibly be human. I might remind the reader that all of this “expert” analysis is coming from a mere photograph. There is no actual body to thoroughly assess and render a real expert opinion. Most are left with speculation at best.

If one ventures over to Kevin Randle’s blog, the seductive power of the “will to believe” is currently being displayed in full force. The comments rendered on Randle’s site display magnificently the art of the circular argument and/or the vain attempts just to argue a point to death regardless of the evidence that has been offered and accepted by most sensible individuals. It is as if Occam’s Razor has been defecated on and tossed aside. Yes, I’m well aware that Occam has been discarded by Ufologist and ET believers, since it’s basic and primordial premise is to separate the logical from the illogical. I assume that such thoughts are not to be considered as sacrosanct.

Some of Randle’s blog commentators have resorted to the tactic of: “The universe is so vast and complete with billions of galaxies that we surely can not be alone and it’s not out of the question that we have been visited by ET civilizations.” Despite this being totally out of context to the Roswell slide issue, no one from the RSG has argued against this assertion. This tends to be a poor attempt to deflect from the issue that the slides depict a mummified human child, yet a prime example of ET proponents presenting illogical evidence combined with poor arguments defending the illogical.

In the end, believers get the brand of ufology that they deserve. They must overcome the suductive powers of their own cognitive biases. We, the RSG, have attempted to help in this area despite the push back from others. The RSG has offered up how we (collective we) deciphered/deblurred the placard. This process has been shown to be repeatable resulting in the same conclusions…scientific method prevails on this point so the issue has been resolved with the exception of a few delusional souls. BTW, this was offered free of charge and without dramatic fanfare.

The truth, as painful to some as it may be, is that the image is that of a mummy of human origin, bizarre as it’s appearance may be to some. I’m still awaiting to see if David Rudiak has sent his request to have the images reviewed and assessed by a forensic anthropologist that he knows…no info back from David at this time. Nothing wrong with this approach as I feel confident that any half-assed anthropologist will come to the same conclusion…mummy of human origin.

SETI’s Seth Shostak Chimes in On The Roswell Slides

Roswell Slides Revealed: ‘… A Smoking Gun It Is Not’

What if the Roswell Slides Saga is a Social Experiment or a Hoax?

The Roswell Slides and Stan Friedman

The Roswell Slides and the ‘Lieutenant’

The Roswell Slides Saga: Some Claims vs Some Facts

Is This Mummy the Famous “Alien” in the Roswell Slides?

The Roswell Slides – A Matter of Provenance