A British couple, Alan and Anna Betts, were holidaying with Anna’s parents near the famous Loch Ness in the Scottish Highlands when Tatiana, Anna’s mother, snapped a landscape picture of the Loch area during a sudden rain shower. 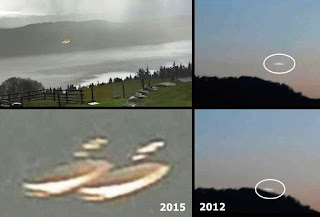 The family did not notice anything unusual about the photo at the time.

But after the couple returned home to York, they noticed two disc-shaped objects in the photo while looking through their holiday photographs on their PC.

The photo appeared to show a pair of disc-shaped objects flying over the famous Loch Ness, near the Urquhart Castle, according to the Daily Mail.

It is not the first time UFOs appear over Loch Ness. A UFO filmed in 2012, seems to disappear behind the mountains.