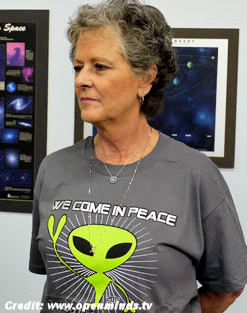 I was recently informed of the passing of Julie Shuster, the former director of the International UFO Museum and Research Center in Roswell, New Mexico. Julie ran the museum for many years, and was the daughter of the public information officer at the Roswell Army Air Field (RAAF) in 1947 who was tasked with releasing a press release regarding the crash of a flying saucer.

I was aware that Julie had been battling sickness and had retired as the director of the museum a couple of years ago. That position is now held by Roswell resident, Mark Briscoe.

However, it was still unexpected and sad news when I received the following message from a representative of the museum: “It is with great sadness and the heaviest of hearts that we announce the passing of our former director – Julie Shuster. Julie passed away on Sunday, June 7th surrounded by her family.” . . .

Is The Roswell UFO Museum & Annual UFO Festival Becoming a Thing of The Past?