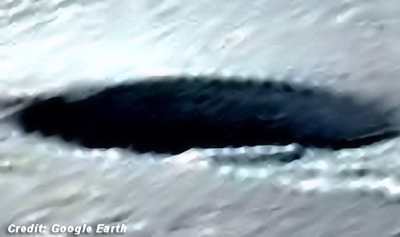 A UFO hunter claims to have found the crash site and wreckage of an alien craft that he believes may have been downed in the Antarctic.

Mr Degterev, who says he is a “researcher of the unknown” posted the images and co-ordinates online before they went viral.

He is convinced the huge unidentified object must have been caused by a UFO crash at least three years ago with the “flying saucer” still half buried there in the ice-land wastes of Antarctica.

He wrote on social media: “In among the endless ice desert, it is the most genuine UFO in its most classic shape.”

The satellite image used by Google Earth was taken on February 15 2012, but has just been made more widely available.

He said: “I think there is very large disc-shaped flying machine amongst the frozen ice.” . . .