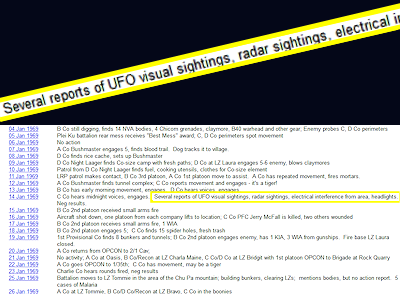 Let’s just forget this ever happened

But then, on Jan. 13, a week before Nixon was inaugurated, something extraordinary happened, although you’d never know it by reading the index line summary of that day’s events: “B Co has early morning movement, engages. D Co hears voices, engages.” Maybe, given the routine deprivations and futility of the mission, it was regarded as just one more damned weird thing in an unending string of weird things. Anyhow, shortly after 1 a.m., a bogey showed up on radar and was reported to have made “two landings,” then a “touchdown,” and yet another landing more than an hour later. The stenographer included no eyewitness descriptions, and North Vietnam wasn’t renowned for its whirlybirds. The clerk listed the thing as a “UFO.”

Given the hostile environs, the beleaguered boys on the ground didn’t ask questions and, according to the log, opened up with five rounds of 105mm Howitzer fire. No details available on accuracy, but nobody was taking any chances. “To Bn from Bde,” the account goes on, “Spooky 23 [AC-47 gunship] will be in vicinity of LZ Laura for any possible engagement of UFO’s. Spooky arrived at 0407.” Wisely, the intruder was gone by time the gunnery platform showed up, but the UFO reappeared on the scopes more than half an hour later and stumped the radar guys for another 15 minutes before disappearing.

At sunrise, stated the entry, “DO Brigade wants 1/14 to check out the area where artillery was employed . . . where UFO’s were fired upon this morning.” The platoon evidently found nothing because the rest the day is saturated with recon reports and accounts of skirmishes. Shortly before midnight, radar operators locked in on another UFO for 10 minutes before it went the way of vapor.

The next day, however on Jan. 14, the line summary wasn’t nearly so circumspect: “C Co hears midnight voices, engages. Several reports of UFO visual sightings, radar sightings, electrical interference from area, headlights. Neg results.” Unfortunately, the main body of the log doesn’t give us much else to work with. The UFO lit up the radar again, around 2:30 a.m., and a “visual sighting” followed. Then came word that “there have been 4 landings at 0093124100 also there is ectrical [sic] interference coming from that area.” Followed by more radar paint and another sighting, a “red light W to E and back, the object is far out, they have no estimation of range.”

Four days later, at 6:30 a.m., the duty officer noted this: “To Bn from Radar Radar sighted a UFO at 9362521625 Bn FDC gave the word to fire on grid. The Bde DO informed us that his higher wants us to conduct a sweep of that area. An aerial observation is requested only.” No follow-ups are given, and there is only one other relevant log reference, on the 19th. That’s when “a patrol left to check out a possibility of a UFO at 0900 to return at 1200” with “negative results except for a possible LZ” with “grass blown down.”

End of chapter. Or is it?

These entries are brought to our attention, once again, by veteran researcher Barry Greenwood, who has been sifting through the National Archives for UFO data as the system digitizes reams of ancient paper. In this case, however, Greenwood discovered the preceding logs online from a 4th ID veterans group. And to reiterate, none of this material –radar contact, orders to fire on UFOs, the discharge of artillery rounds, the deployment of a gunship into the fray – can be found in the Air Force’s Project Blue Book files.

The January 1969 UFO reports had to make the brass at least a little dyspeptic, given what happened in the summer of 1968. That’s when a spasm of UFO activity near the DMZ was initially ascribed to enemy helicopters. In fact, the Associated Press coverage of those encounters (also supplied by Greenwood), was quite detailed with its inaccuracies. In quoting largely South Vietnamese sources, the AP on June 17 reported that artillery and F-4 jet fighters had destroyed perhaps as many as 12 Soviet Mi-4 troop transport choppers, with up to six crashing into the Gulf of Tonkin. This blow-up occurred at practically the same time – amid reports of unknown lights drifting near the DMZ and out to sea – that U.S. jets accidentally bombed the Australian destroyer Hobart on the evening of June 15, killing two and wounding seven more. They struck a U.S. warship as well, and blew a friendly patrol boat out of the water, killing five.

Problem: No instigating helicopter wreckage was ever found. A week after Uncle Sam slammed the wrong targets, Gen. Creighton Abrams, commander of U.S. Forces in Nam, went on record and flatly refuted the enemy helicopter rumor. Even so, troops in the area continued to insist they were seeing the nocturnal helicopters, or at least, as one Marine corporal put it, “six blinking red lights, each about 500 meters apart.” But the mistaken-identity tragedy in the Gulf chilled press coverage of UFOs re-materializing over American forces in the Highlands in January ’69. Then again, there were no calamitous mishaps the second time around, either. Or at least, none that we know of.

You can count on the fog of war to produce stories that don’t entirely add up. But maybe this one’s bigger than we suspected. Maybe other logs and records will surface as the National Archives presses forward with its data conversions; certainly, official history (Blue Book) is worthless in this case. Maybe veterans’ groups can shed more light on this mystery. Again, Barry Greenwood is at [email protected]

‘…16 UFO Encounters During The Vietnam War…’

UFOs and US Military Were In Contact, Claims Vietnam Vet | VIDEO