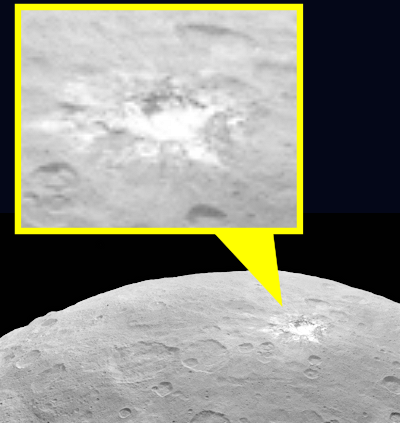 Now here’s a spot of a different color: The latest picture released by the science team for NASA’s Dawn mission shows a bright patch on the dwarf planet Ceres that’s distinct from the eerie “alien headlights” seen in other imagery.

The best-known collection of bright spots on Ceres is known as “Spot 5,” and the best guess is that those spots are made of ice deposits — although scientists haven’t completely ruled out the possibility that they’re made of salt or some other light-colored material.

The picture released on Tuesday focuses on another bright area called Spot 1. The image was captured on June 6 from an altitude of 2,700 miles (4,400 kilometers).

Is There Life On Ceres? Water Detected on Dwarf Planet