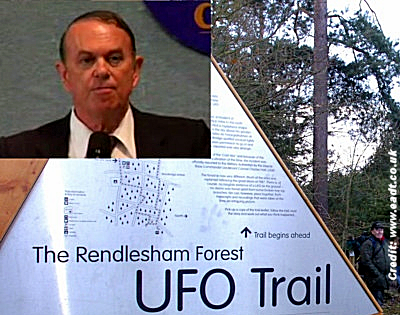 A former US Air Force commander, described as an “unimpeachable” witness to events known worldwide as the ‘Rendlesham UFO incident’, is returning to Suffolk 35 years on.

Retired Colonel Charles Halt was at the centre of a mystery that unfolded outside RAF Woodbridge over two nights in late December 1980.

Next month he will fly back to Suffolk and address the local public for the first time since it happened.

As deputy commander of the twin bases of Bentwaters and Woodbridge, he prepared a memo to the Ministry of Defence describing “unexplained lights”, and recorded what became known as the Halt Tape – a documented investigation in the forest, during which Halt saw mysterious lights like those witnessed by airmen Jim Penniston and John Burroughs two nights earlier.

In 2010, Halt signed an affidavit claiming the encounter was extraterrestrial and had been covered up by the government. . . .