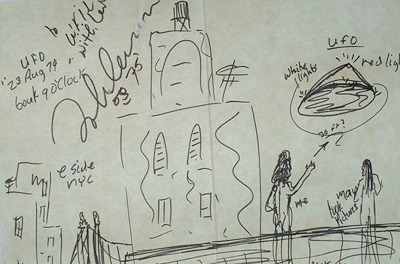 A leading expert on one of North Wales’s greatest UFO mysteries claims to own a rare sketch John Lennon created to record an alien encounter he allegedly experienced in America.

Russ Kellett, is known for investigating the 1974 UFO Berwyn Mountains incident involving theories of an extraterrestrial craft crashing in the area.

Mr Kellett said a few months ago he bought Lennon’s sketch of an encounter he had with a flying saucer in New York – the same year as the North Wales incident.

Lennon, whose first wife Cynthia died earlier this year and once lived in Ruthin, was said to have made a number of drawings following the sighting. . . .

John Lennon’s Killer was Under the Control of Aliens?