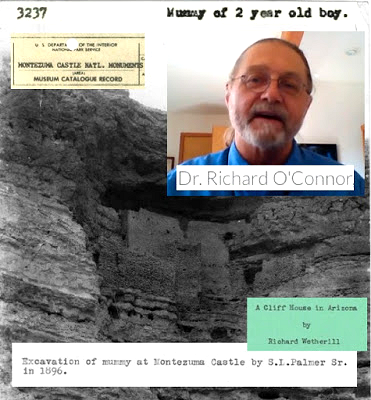 Dr. Richard O’Connor on Putting Away the Roswell Slides

“there’s no way that’s not the same being,” and that the body in the Slides was a Native American child, the “only conclusion.”

Dr. Richard O’Connor was a guest on an episode of The MUFON UFO Radio show on KGRA guest-hosted by Erica Lukes. The topic was the controversy over the Roswell Slides.

Dr. Richard O’Connor had written a letter to Linda Moulton Howe shortly after the placard was read, where he said although he had personally confirmed the deblurring of the Slides placard, he felt it did not accurately describe the body in the pictures. He went on to describe features that looked unusual.

On May 24, Jaime Maussan interviewed Dr. O’Connor by Skype where he discussed his views on the body in the Slides. The full interview was posted on YouTube. Whitley Strieber’s Unknown Country used the video as part of this article, “Doctors Agree: Roswell Slides Show a Nonhuman Body”

Although Dr. O’Connor did not participate in the BeWitness event, but he became associated with it after the fact. This was in large part due to him being one of the few people discussing the case that was knowledgeable in medicine and spoke English.

Getting back to the KGRA show, Dr. O’Connor was the first guest. He recapped his analysis, but stressed that it was made from (what amounts to) a single picture, a blurry image shot through glass, taken at an angle to the body.

The interviewer mentioned the consequences of the NPS material released due to the FOIA request by Shepherd Johnson, to which Dr. O’Connor replied:

“Yeah, I’ve just, over the past 48 hours more or less, been looking at that, and it seems to me like it’s drawing us toward the conclusion that in fact is this photograph probably does represent a native American child. There were some, a couple of photographs in the last pages of that set of documents, one of them in particular on page 176, and in my opinion it really does show a different photograph of what is very likely the same child.”

Tom Carey on life after the Slides
Tom Carey had been on another KGRA show June 2 with Don Schmitt, and at that time he was challenging the reading of the placard, and all that it meant. On this show, Tom Carey appeared to have absorbed and accepted, or is in the process of accepting the facts. He was not asked about whether he’s changed his mind on the Slides, but in the discussion it sounds like he’s come to the realization that the Slides are not “what we believed we had…” He talks about things in the past tense.

In talking about the material gathered for the BeWitness presentation, “that was our conclusion… what we knew up to that point..” Of the placard being read he says, “a day or two later, this bombshell hits about it being a mummified two-year-old boy. Well, talk about a right cross, or a left hook. He also seems to feel betrayed by two of the people who he’d asked to help with the placard have since “joined our critics.” Of the critics, he said he’d have worked with them, “had they been civil. In the opening, he mentioned having plenty to keep him busy, a new book coming out with Don Schmitt, and another one planned beyond that, but first up is their appearance at the annual Roswell Festival. Perhaps he’s putting the Slides behind him, returning to fundamental Roswell research.

To finish discussing the show, I should mention that Jamie Maussan was the featured guest, and the last hour was devoted solely to him. He maintains that the Slides are genuine and the other photos do not seem to match it, and even if they do, the body is abnormal, possibly the that of an alien being, one of the “Sky People” of native American legend. He rejects the new evidence, and continues to defend the Slides.

After the show, I was interested in finding more about about Dr. O’Connor’s change of position on the topic. I found his information at the Jesse A. Marcel Library and sent him a note, and to my surprise he invited me to call him instead. I found Dr. O’Connor to friendly, knowledgable, and was impressed with his candor and swift willingness to revise his conclusions in the face of more information and evidence.

He told me that looking at a photograph is fraught with pitfalls, and mentioned the fact that the quality of the Slides photograph was not very good, the details were not clear due to the blurry photograph, which was taken at an angle from the body (and possibly distorted by the glass in the case).

There were some characteristics that he still didn’t quite understand, like the condition of the chest cavity, but it occurred to him that the terraced cliffs of Montezuma Castle must have caused the deaths of a number of children from falling off the ledges. He wondered if that could have accounted for the injuries to the child’s body, particularly the damage to the head and the fractured femur. I pointed out the the shallow grave may have accounted for some of this, particularly the loss of the lower leg. (I thought later that the excavation by amateur archeologists could also be a factor.)

He stated that after he looked photo in the National Park Service FOIA documents, that the “there’s no way that’s not the same being,” and that the body in the Slides was a Native American child, the “only conclusion.” He thinks that this absolutely proves that the Slides had nothing to do with Roswell and that that the matter is closed.

He thinks the lesson is to be learned from this, that if you have some extraordinary evidence, that putting it out for an open-source examination was the way to get results In this instance, it didn’t take long for many people working together to determine the truth, and that by sharing information it’s a more efficient means of reaching the truth.

As for the Slides and the BeWitness show, he personally does not feel it was a scam, and that the people involved were sincerely acting on the information they had available to them at the time. We discussed how the limitations imposed by the Slidebox Media non-disclosure agreement had prevented the sharing of the information. He said by holding back the information, it hindered the discovery of the truth.

He went on to say that the Maussan had made a good presentation in other respects than the Slides, and felt there was value to the discussion of the historical Roswell case and presentation of witness statements. About the Roswell Slides, he also said the evidence shows it was an archaeological finding. Unless there’s a body can be examined, the case is completed. Otherwise, it is just speculation from a photograph alone. He won’t say a negative word against Maussan or anyone involved, but can’t figure why Jaime is hanging on in the face of overwhelming evidence.

Dr. O’Connor thinks this is finished, but that he’s still optimistic about the study of UFOs and the Roswell case. O’Connor worked alongside Jesse Marcel Junior for a great number of years and was convinced by the experiences that he shared, as well as the testimony of other witnesses. He’s sure of the reality of the Roswell event and that UFOs are visitors from outside our planet, and that they are worthy of study.

He’d like the reputation of the UFO topic to improve so that more scientists would be attracted and become involved. He also thinks that the average person is unaware of the genuine nature of things, and that with better education on the topic, support could be given to properly fund the scientific investigation of UFOs. He’s convinced that would to some conclusions and developments to help answer the questions and provide some understanding.

The Roswell Slides – The Child from Montezuma Castle: A Summary

Roswell Slides: It’s All Over but the Accountability

The Roswell Slides: The Seduction of the Will to Believe

SETI’s Seth Shostak Chimes in On The Roswell Slides

Roswell Slides Revealed: ‘… A Smoking Gun It Is Not’

What if the Roswell Slides Saga is a Social Experiment or a Hoax?

The Roswell Slides and Stan Friedman

The Roswell Slides and the ‘Lieutenant’

The Roswell Slides Saga: Some Claims vs Some Facts

Is This Mummy the Famous “Alien” in the Roswell Slides?

The Roswell Slides – A Matter of Provenance