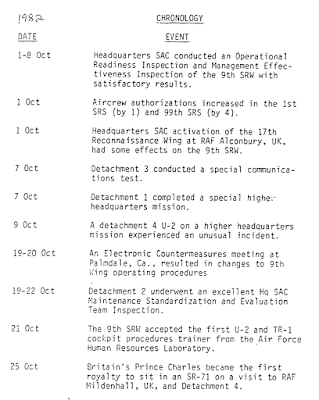 One of the things that never ceases to stagger me about the UFO issue is the sheer quantity of governmental material that has been generated because of it. Its now been 70 years worth. For a subject that is, supposedly, mere fantasy, there seems to be no limit, no slowing down even, to the discovery of unseen, unapprised, once classified documentation pouring in from a growing assortment of sources. If one knows what they are looking for (which is half the battle) they can pretty much be sure to discover something that they, and no one else often, have ever seen before. This may sound baffling to a person who has never tried. The notion that so-called “UFO files” (a term that gets thrown around too loosely, too often) can be simply weeded out of official sources whenever one feels like it, seems implausible, right? Well, to my daily and nightly amazement, it’s not.

I recently stumbled upon a few large databases of American military and intelligence publications (870 to be exact) at the site archive.org that have been wholly, or at least partially, declassified by their “originating agency”, or, more formally, their “Office of Primary Responsibility” (OPR). Now, for those interested, and most people sadly are not, any file created by any Directorate, Major Command, Field Agency, Fleet, Component or whatever, within any branch of the US Department of Defence (Army, Air Force, Navy and Marines), is “owned”, or “promulgated”, by that organisation, or its successors, for eternity; and, in the case of the lists I am going through now, we are spoilt for choice. There are hundreds of files from seemingly every major component of the whole US DoD represented.

Anyway, In a little over five weeks, I have managed to painstakingly go through 400 or so (of 1000’s) and have already found 24 publications that in some way do, or may, relate to the UFO matter – and some of them relate very openly. Maybe more importantly is that some of these records not been been seen by UFO researchers yet. I have consulted some of the researchers who do this sort of thing day and night, and a good number of these files are completely new to them.

So what’s in the assortment so far? Below I detail two of the more interesting ones, with plenty more to come in future blog posts.

The first one I came across is a modestly laid out 9 page document which lists various important events and milestones of the US Air Force’s 9th Strategic Reconnaissance Wing for the year 1982. Titled, “CHRONOLOGY 1982 9th Strategic Reconnaissance Wing”, the document is a loose tabulated list with dates on the left-hand side of the page, and events in the main middle-to-right-hand side. Typical entries include things like “5 Mar The 9th and 100th Wings participated in a joint Short Sprint readiness exercise” and “16 April The Joint Chiefs of Staff decided to continue Operating Location – OF at Patrick AFB, Florida indefinitely”. Important stuff most would agree, no? What then do we make of this entry on page 7 which states:

9 Oct A detachment 4 U-2 on a higher headquarters mission experienced an unusual incident.

What is meant by “unusual incident” is unclear. Such phrasing is usually a euphemism for an event that higher headquarters would prefer not to be known. How many options for this are there for a U-2 in flight? A mechanical issue would likely be stated as such. It is possible that the aircraft experienced a missile attack from the air or ground, again something likely to be stated as such in an internal document. Could there have been a UFO sighted, surely an unusual incident? UFO incidents have been known to be vaguely described in unit histories. Maybe someday what this was will be known. Above top is an image of the page in question.

The second publication I saw which contained something of significance is titled “History of the Assistant Chief of Staff, Intelligence: July – December 1967”. This particular file seems to be focused solely on the functions and responsibilities of the 1127th Field Activities Group (FAG), and starts off, for reasons unknown, at Page 46. For those readers who don’t know, the 1127th FAG, historically, relates to the USAF’s painful reaction to the UFO issue. The organisation started out its shadowy life as the 4602nd Air Intelligence Service Squadron (AISS) in January 1953, when Air Defence Command Regulation 24-4 created it for a wartime mission of exploiting downed enemy people, papers, and hardware. In March 1953, the decision was made to use the 4602nd AISS in UFO investigations and, by the end of December 1953, a working agreement existed between the Air Technical Intelligence Center (ATIC) and the new 4602nd AISS. In fact, all UFO reports were to go through the 4602d AISS prior to any transmission to Project Blue Book at Wright-Patterson Air Force Base – Project Blue Book being the publicly admitted UFO “investigative” desk, if you can call what they did as “investigations” that is. Anyway, in July 1957 the 4602nd, became the 1006th AISS, then in April 1960, it was reorganised as the 1127th FAG! Furthermore, through the years, these organisations ran the infamous “Project Moon Dust”, which many of you will know of. For those that do not, put simply, the original mission of Project Moon Dust, as stated by US Air Force Message #54322, dated December 23, 1957, was to “to collect and analyze raw intelligence reports from the field on fallen space debris and objects of unknown origin”.

Now, in regards to the publication I am discussing here, some half way through the document, we see the sub-heading “MOON DUST.” It goes on to read:

“Secret/No Foreign Dissem) During the last half of 1967, the Operations Plans Branch (AFNIAAB) received from the 1st Aerospace Control Squadron (SPADATS) at Ent AFB, Colorado, notifications of the deorbit of 49 Soviet space objects (rocket bodies, payloads and space platforms), and of 17 US space objects considered to be of special importance.”

Below is an image of the page in question: 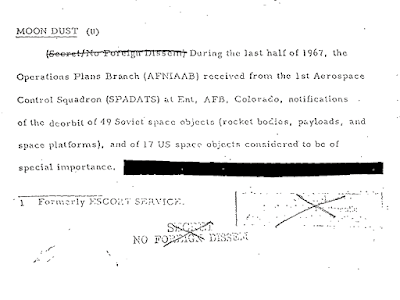 On the next page, a further 6 lines of text have been completely redacted, or, “blacked out”, by USAF declassification review authorities. The act of redacting certain lines of text, or even whole pages, is done when dedicated records management units review any wholly classified material. Such redactions are done under the guise of one or more of the the specific exemptions allowed which relate to national security. Considering the publication I am presenting here is from 1967, and we are now in 2015, one really wonders if such actions are even remotely necessary. Not all is lost though, for this special portion of the document goes on to finally say:

“Inspection by US authorities was precluded by the strained diplomatic relations which have resulted from the Arab/Israeli conflict, but AFNLAAB has received a report that a mission composed of 13 Soviet scientists and technicians did examine the object in October, 1967. No further details are available.”

Below is an image of this page. 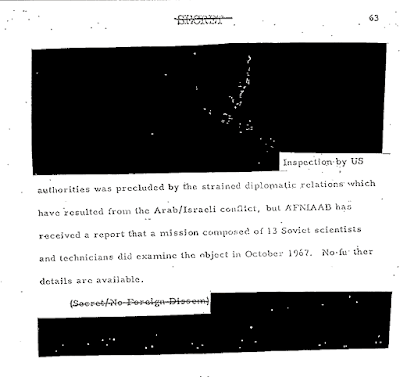 Looking at the bigger picture, the only thing these obscure publications really prove is that there is more UFO-related, governmental (usually of military providence) to be found. As stated above, I found this material at archive.org. There are dozens more under-utilised databases and archives that will surely contain significant, at least historically, material. None of this of course will solve the UFO matter. It will, however, fill in little parts of history, and, sometimes, lead us to more discoveries. If anyone wants copies of the whole files I have discussed above, please email me.

UFOs, the AISS, and Air Force Interest After Blue Book

THE CONCLUSION OF THE NASA LAWSUIT: Concerning the Kecksburg, PA UFO case of 1965