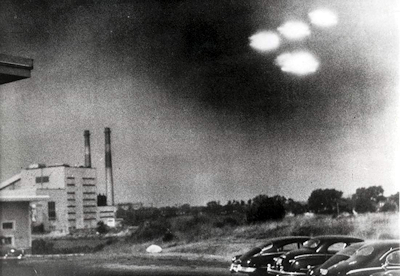 It’s credited as the first modern UFO sighting and the origin of America’s obsession with flying saucers. But it might have all been based on what The Atlantic calls “one of the most significant reporter misquotes in history.”

On this day, June 24, in 1947, an amateur pilot was on his way to an air show in Oregon when he saw a bright blue flash of light in the sky near Mount Rainier. At first he thought it was the sun glinting off another aircraft, but the only other plane around was about 15 mi. away, and not glinting. Then he saw nine more flashes of light, in quick succession — coming from what he later described as unidentified flying objects.

It was when the pilot, Kenneth Arnold, tried to describe the motion of the objects to a reporter for the United Press that the mix-up occurred. He said they flew “like a saucer if you skip it across the water.” The reporter took this to mean that the objects themselves were saucer-like, and news reports across the country repeated that Arnold had seen “flying saucers.” . . .

“What I Saw” – By Kenneth Arnold