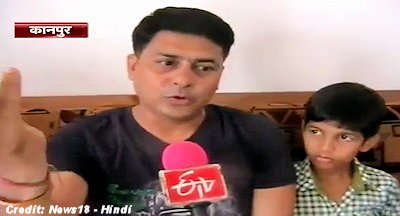 An Unidentified Flying Object (UFO) was captured by a young boy in a smartphone on Wednesday morning.

The boy, belongs to Kanpur, Uttar Pradesh, captured the image while taking early morning pictures of clouds and spotted the ‘flying saucer’ like object.

As soon as he noticed this, he informed his parents.

When asked Abhijit Gupta, the child said, ‘I like nature photography and when I saw various shapes of clouds in the sky I started clicking pictures on my phone. While I was going through the clicked pictures in the photo gallery, I saw a round object in the photographs and when I zoomed to take a closer look at it, I noticed it was a UFO’.

Abhijit’s father Santosh Gupta too confirmed that the object did look like an UFO.

Santosh said, ‘When we checked the pictures snapped by son, we saw red light spotting around the white coloured round object and it appeared as if white smoke was emitting from the centre of the object.’ . . .

UFO Spotted in the Sky Above Kochi, India