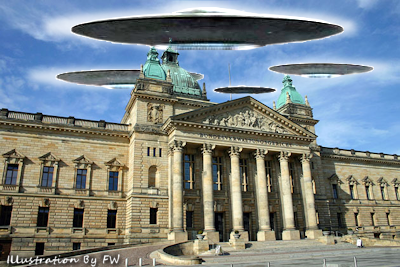 Leipzig (Deutschland) – After years of law suits, the Federal Administrative Supreme court of Germany forces the administration of the German Parliament – the Bundestag – to release and give public access to an expertise on “UFOs,” the search for extraterrestrial intelligences and Germanys implementation UN-Resolution A/33/426″ (that asked its member states to conduct official research into UFOs) compiled by the parliamentary „Scientifical Service“. So far the Bundestag not only denied public access to this document but also fought and intensive and so far successful legal dispute against its publication. The new court sentence is a big step not only for German UFO-research and disclosure but also for the freedom of information in general.

The function „Scientifical Services“ is „to supply the members of parliaments with factual information, analysis and expertise comments of in their political work in the parliament and their constituencies“. Therefore on should assume that those compiled expertise would be open for public access as well. But that was not so until the recent verdict. It was up to the administration of the Bundestag to release them – or to restrict access to it.

In 2010 the German Exopolitic initiative „Exopolitic.org“ lead by Robert Fleischer learnt of an expertise by the service on „UFOs, the search for extraterrestrial intelligences and Germanys implementation UN-Resolution A/33/426″, that suggested to its member states to conduct official research into UFOs. While several journalists got hold of copies the paper, it was not legal to publish it in its full content. Frank Reitemeyer then asked to view the expertise but his access was denied by the administration of the Bundestag – so he went to court. When he was granted that permission in the first juristically instance, the Bundestag administration successfully appealed on points of law. Since then the lawsuit went through all instances and the Bundestag administration even asked a renowned a big law firm to compile a legal opinion (which under normal conditions costs about 50.000 Euro, as some legal experts estimate).

While the latest and final decisions by the supreme administrative court (Bundesverfassungsgericht) is a big step for the freedom of information, the now released „UFO expertise“ by its Scientifical Service should not be confused with secret UFO-files of research and investigation into UFOs by official German offices, ministries or even the military. It is an informational summary of known facts on UFOs . . ..

* Special Thanks To Michael Landwehr

Triangle UFO Above Germany Leaves Questions In Its Wake | VIDEO