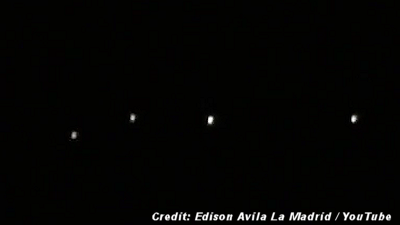 The video (seen above) shows five – sometimes six – white, round lights floating in the night sky that could be attached to the same object or could be floating independently.

The 15-minute, 38-second video is in Spanish, but the website, Inquisitr, stated that the video was shot by a Peruvian resident and his son after they spotted the lights floating over their home.

According to Inquisitr, “First one appears, then it disappears,” says the son. “Are they five? Or is it just a big one?” he wonders. “I am scared now. Do you think they know we are recording them? Please, don’t leave me.”

On the video, the father says he believes the lights are attached to “a larger spaceship” which would explain why the group of lights remains so still in the sky.

“It is still, completely still. It is like that one from Mexico,” he tells his son, according to Inquisitr. “What we are seeing is just the base of it.”