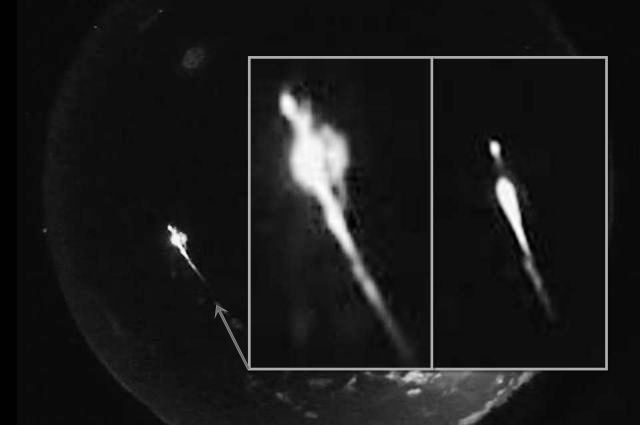 According to NASA: There was a bright event seen across several Southeast states (Georgia, Tennessee, South Carolina, and Alabama) last night at 12:29:30 AM CDT (1:29:30 EDT). Based on the data we currently have, this object was not a meteor or fireball.

Tracked by 5 NASA cameras in the SE, it is moving at roughly 14,500 miles per hour, which is too slow to be a meteor.

As you can see in the first video, it has also broken into multiple pieces, which, combined with the slow speed, indicates a possible reentry of space debris.

There are over 120 eyewitness accounts on the American Meteor Society website .

According to Spaceflight101, USSTRATCOM predicted the re-entry of a spent Block-2BL upper stage of a Molniya rocket that had been in orbit since 1973 for June 29, 2015.

However, data from USSTRATCOM show that the re-entry to have taken place at 4:12 UTC +/1 minute over the Atlantic Ocean. This data would mean that the object re-entered well before the bright event over the Southeast United States observed at 5:30 UTC.

This suggests that USSTRATCOM either caught a different re-entry over the Atlantic, possibly a natural event, or the rocket stage broke apart at some point in its final orbits with one object surviving until 5:30 UTC. Read more at Spaceflight101.

Despite NASA’s statement that they have no idea what exploded in the sky over Southeastern United States, I think they actually know what has been the cause of the phenomenon and with all the strange and unknown objects falling from the sky this year we may wonder whether the object was a missile or a UFO (man-made or extraterrestrial) that exploded over Southeastern United States.

In the video below, Bill Cooke from NASA’s Meteroid Environment Office describes the bright sky event over Southeastern United States.