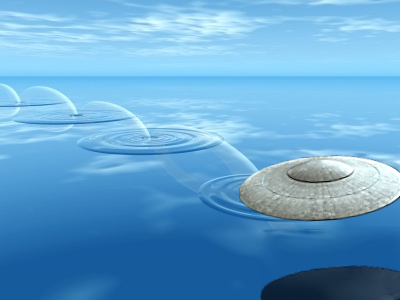 It’s the most wonderful time of the year

I was actually thinking about renewing my subscription to Time magazine the other day, just to stay connected to what passes for news among corporate giants. But last week, a little Time.com blurb titled “This Is Why People Think UFOs Look Like ‘Flying Saucers’” popped up on Google News. After that, I figured I’d save my $$$ and drop the wad on Hooters instead.

Let me guess how this one happened. Writer Jennifer Latson probably hasn’t been at Time.com long. Her niche, according to the tag, is “History,” as in, On This Date in 19whatever. The Time.com “History” subcategory label is “Bizarre.” So she wants something bizarre. And time is running out. She’s scanning every nook and cranny for a June 24 milestone. Scanning scanning scanning and — ta-daah! Hot damn there it is: On this date in 1947, Kenneth Arnold coined the term “flying saucer.” Yay. Even better, she doesn’t have to do hardly any research. She references and liberally borrows from the 6/15/14 edition of Atlantic Monthly, where writer Megan Garber laid it all out for her in a piece called “The Man Who Introduced the World to Flying Saucers.”

This story is so analogue you’ve got drill all the way into the 1950 sedimentary layer for Edward R. Murrow’s interview with Arnold. That’s where the Idaho businessman told the world how the yo-yos in the press had misquoted him three years earlier. Arnold insisted he never described the nine objects he spotted that summer day over Washington state as looking like flying saucers. He said they flew “like a saucer if you skip it across the water.” Shape-wise, the UFOs he saw resembled sunlight on metal, which he calculated were traveling in sync at 1,200 mph. So that’s how we got the “flying saucer” term, which in turn triggered the flying saucer/flying disc craze of 1947.

And that – as Latson parroted in her Time.com knockoff – is Why People Think UFOs Look Like Flying Saucers. Even today. Fascinating, how gullible we are.

As fate would have it, the annual Roswell UFO Festival starts on Thursday, which also coincides with World UFO Day. Which means if I were Latson’s editor, and if I considered myself a reasonably informed and creative corporate hipster keeping an eye on the nutty fringe, I’d put her on the next plane to New Mexico. I’d tell her to grab mucho B-roll on the space alien parade. Then I’d pay her way into scheduled lectures by Thomas Carey and Don Schmitt.

These are two of the guys who, during that pay-per-view thing back in May, tried to pass off a couple of old Native American mummy photos as pix of a UFO occupant who died in the alleged 1947 crash. Several researchers who vetted the disastrous Kodachrome slides, including Schmitt, have since apologized for their sloppy spadework. But we’ve not heard much from Carey since this PR bomb blew up nearly two months ago. And the suspense is killing me. And that’s the great thing about the Roswell UFO Festival. Everybody, no matter how compromised or diminished, gets multiple shots at redemption. And of course, as a Time.com editor, I’d want to keep this non-story going for as long as possible. After all, “UFO” gets 78,600,000 Google results; that’s nearly double “Sinatra,” and almost four times “Oprah Winfrey.”

I’d want Latson to report on the tension between Schmitt and Carey for its dramatic potential, and presented in installments for the return traffic. I’d want her to get street-level feedback on the controversy, so long as her sources are wearing ET costumes; I’d even throw in a $10 Applebee’s incentive-bonus coupon for slipping “the truth is out there” into her copy. I’d want to know from lobby vendors which particular X-Files T-shirts and inflatable green hybrid-child dolls and other “out-of-this-world souvenirs” are “selling at warp speed.”

And for the wrap-up, I’d want her to collar a good-humored pop-culture expert to tell us exactly Why We Want To Believe. That angle hasn’t been explored since June 26, when an International Business Times headline wondered, “Why do people believe in unidentified flying objects, aliens and abductions?”

If I were an editor with Time or Time.com or The Daily Planet or whatever, I’d be using this weekend to think outside the box and showcase my full potential.